Gekkoukan High School (月光館学園, Gekkou-kan Gakuen)?, sometimes shortened to Gekkou High (and once referred to as "G High" in a tabloid magazine), is a major location in Persona 3. While little information about it is given, it appears to be a popular school founded by the Kirijo Group at Tatsumi Port Island. During the Dark Hour, it transforms into Tartarus.

Before Gekkoukan High School was founded, the building was built by the Kirijo Group, intended as a laboratory to investigate and experiment on Shadows. The scientists would gather the Shadows and harvest them, amplifying their capabilities and their potential. It is later shown that during the experiment, the arcana that was never meant to be, Death, was created. It is also revealed that via the experiments, the leading group of the scientists came to know about The Fall. The majority of the scientists embraced the prophecy, with the exception of Yukari's father. Declining Death, Yukari's father intercepted the experiments and destroyed many of the facilities along the way. It is also where the Shadows began to merge with one another, intending to reform into Death, who was forcefully torn apart. The laboratory was later destroyed by the enraged Shadows, leaving only a few of the scientists alive.

To cover up the incident, the Kirijo Group spent a large sum of money and rebuilt the laboratory into a high school. However, as the students enrolled, many of them disappeared for reasons unknown. It was, however, written in the papers that the school suffered from an explosion. 10 years later, the protagonist enrolls into Gekkoukan High School.

Similar to the context of the Japanese school year, the semester starts in April (unlike in Western countries where they start in September) and ends in March. Students attend classes from Monday to Saturday.

In the lobby of Gekkoukan High School, there is a school store that carries different items everyday. List of Items:

The protagonist can become a member of more than one club, by virtue of talking and being invited by the club leader. Club activities happen after school and the protagonist can join in a club's activity by talking to the club leader or going to dedicated club rooms. Mr. Ekoda mentioned that starting a club needs a minimum of five members, though Fuuka was still able to make the Cooking Club an "unauthorized" one (which implies that the Fashion Club is also unauthorized).

Note: Shuji Ikutsuki mentioned once that, on paper, the Specialized Extracurricular Execution Squad (SEES) is classified as a school club. They are omitted in the list since they don't meet After School to do club activities (and presumably since it is just a ruse for SEES to be able to operate more freely with less suspicion).

While sports teams are still considered a "club," the protagonist can only be a member of one sports team, by virtue of talking and being invited by the team captain/manager of the sports team. Practices are on Mondays, Wednesdays and Fridays.

In the case of the female protagonist, on July 25, Ms. Kanou will approach them in the classroom after school before the start of Summer Break. She informs them of a fellowship on August 1-2 at Yasoinaba High School, a school by the countryside. In preparation for this, from July 27-31, the protagonist is mandated to attend a whole-day special training (only getting free-rein on Evenings). The female protagonist only gets to enjoy the Summer Break fully by August 3rd.

This is only available for the female protagonist. Unlike clubs and sports teams where she'll be invited to join, school committees are a requirement for all its students (which is the case for Japanese high school students) and she can only be a member of one committee. As homeroom advisor of the class, Ms. Toriumi will approach the protagonist after a few weeks to select what school committee she plans to join. Committee meetings and duties happen during Tuesdays and Thursdays.

The protagonist, Junpei and Yukari in a classroom

Various students on the emblem

The protagonist and Mitsuru on the emblem

Yukari and the protagonist outside the school 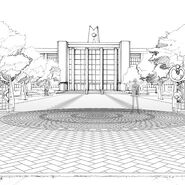 Concept sketch from Persona 3 The Movie

Auditorium in Persona 3 The Movie

Concept artwork from Persona 4 The Animation

Uniforms in Persona 4 The Golden Animation

Uniforms in Persona 4: Dancing All Night 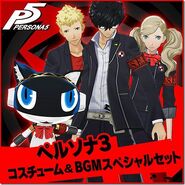