Gdon, also known as Dawon, is a demon in the series.

Gdon is also known as Dawon from Hindu mythology, which in turn carried over the myth of Dawon from Tibetan legends. In Hinduism, Dawon the lion/tiger is the mount of the Hindu goddess Durga, being an offering to the goddess, who aided her when Nirvana ever needed protection. When in battle, Dawon used her claws and teeth to rend any foes that were underfoot asunder. She carried Durga to victory against the buffalo demon Mahishasur. Durga and Dawon are worshiped in a more peaceful environment instead of their usual violent festivals, were Durga is called the Fair Lady and Dawon is known as the pure white tigress. Most legends about Dawon show her as a violent tigress, tearing her foes apart.

Dawon can only be acquired through fusion. He can be encountered as a regular enemy within Ichigaya's Kagurazaka Zhu Que Caverns and within Suginami's Diaspora instance.

"The tiger mount of the goddess Durga, of Hindu mythology. Durga was born to defeat the Asura Mahisha, and Gdon was granted to her to help complete the task."
—Devil Summoner: Raidou Kuzunoha vs. The Soulless Army devil chart

Gdon begins appearing in Dark Fukagawa-Cho as a random encounter.

Gdon is a Persona that can be acquired from Shuffle Time in the Void Quest dungeon. One of Margaret's Social Link requests is a Gdon that has inherited the skill Rampage. To do so, the Yu Narukami can fuse either:

When the party reaches the test tube chamber in the Karma Society Tower where Sera was contained moments earlier, a boss battle initiates with Heat in his Agni form and two Gdons. After the battle, they become random encounters later in the EGG Installation.

During the boss battle, they help bolster Agni's defenses and attack. One will cast Ice Drain once per turn and both will only use standard attacks. However, they will counterattack physical attacks. With their main weakness blocked by the Ice Drain spell, an Electricity skill can be used to shock them, leaving them open for criticals. 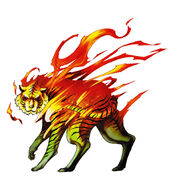 Gdon as it appears in Shin Megami Tensei: Devil Summoner 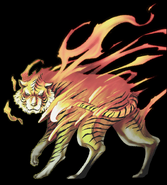 Gdon as it appeared in Persona 4

Gdon in Raidou Kuzunoha vs. The Soulless Army

Gdon as it appears in Card Summoner 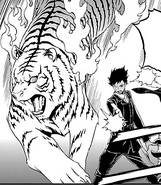 Gdon in Devil Summoner: Raidou Kuzunoha vs. The Lone Marebito
Community content is available under CC-BY-SA unless otherwise noted.
Advertisement