Gagyson is a demon in the series.

Gagyson, whose name means "one farms striped mullet," was originally a Hebrew minor god of plague that was demonized into a demon. While in "The Book of Abramelin," he is a low-ranking demon subordinate to Arioch.

Gagyson is the minion of Ose who, with the aid of the human Akito Kobayashi, is working towards completing the summoning of his master. He secretly despises and works behinds Akito's back, summoning demons to kill Kojiro Souma. As Ose is fighting with Masakado and Cerberus, he offers his life to him, allowing Ose to become more powerful and gain wings.

Although he tries to do things that he feels are in his master's best interest, they ultimately lead to foiling his goal. His attempt at assassinating Kojiro resulted in him gaining Cerberus as an ally and for him to incarnate into his true Godly form Masakado. Revealing his betrayal of Akito and then abandoning the body of Saki Yagami leads to Akito reviving her as Konohana Sakuya and cutting off the magnetite supply that Ose needs to regenerate.

"A low-ranking demon whose name means "spread out flat." He is thought to originally have been a Hebrew plague god.
Opinions vary to Gagyson`s master, but he is commonly depicted as a servant of Orias or Ose."
—Devil Survivor 2 compendium

Gagyson as seen in Devil Survivor 2 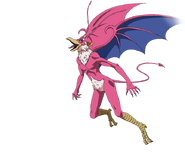 Gagyson as he appears in Devil Survivor 2 The Animation
Community content is available under CC-BY-SA unless otherwise noted.
Advertisement