Gabriel is a demon in the series.

Gabriel is a high-ranking messenger angel and true archangel in the Abrahamic trio of religions (which encompasses Christianity, Judaism and Islam. Their name means "God is my strength" and is known to be the left hand of God and the embodiment of the holy spirit, in contrast to Michael who is the right hand of God. To Christians, Gabriel's primary task is that of a messenger who told Elizabeth that she would bear John the Baptist and Mary that she would bear Jesus, meaning they are remembered each Christmas/Advent as the messenger of the Annunciation or Immaculate Conception (it was also Gabriel who asked Mary to name her son Jesus, meaning "savior.") They are also mentioned as announcing the prophecy of seventy weeks to Daniel and is also recognized as St. Gabriel, the patron saint of communications workers. For Muslims, Gabriel is especially noted for revealing the Qur'an to Muhammad and for being the messenger that tells prophets of their obligations. In Islam, Gabriel is the highest-ranking angel, while Raphael is the second. They are also called the holy spirit in Islam.

While typically thought to be male or of a neutral gender in early texts, some schools of thought believe that the portrayal of Gabriel's feminine face in art denotes that Gabriel is in fact a female angel. This may be in contrast to Michael's male role as the right hand of God, but the subject is still largely debated in religious circles. When portrayed as a female, Gabriel often holds a lily, suggesting a gentle feminine nature. Gabriel is the Angel of January and is associated with the zodiac sign Aquarius.

Gabriel is one of the four archangels in the service of YHVH and is usually seen with Raphael, Uriel and Michael.

"Origin: Israel. One of the 4 heralds, the seraph of water. She is known as the angel who told the Virgin Mary about her Annunciation. Though angels are said to be of neither sex, Gabriel is commonly thought to be female. She is said to be the supervisor of the Garden of Eden and the cherubs. Some say Gabriel is also the one who dictated the Quran to the prophet Mohammed."
—Shin Megami Tensei A-Mode DDS dictionary

Along with Uriel, Raphael and Michael, Gabriel is one of the four major sub-bosses of the last arc of the game: the seraphim, and one of the most powerful angels under God's orders that stands guarding the superior part of the Basilica.

She appears defending the third floor, stating if the protagonist isn't law aligned that there can only be one penance for the protagonist's crimes against God: "the sting of death." After this, she will proceed to engage the protagonist in an entirely optional boss-fight, as they can choose to just take the stairs towards the next floor without having to enter Gabriel's room.

In the Law route, Gabriel instead joins the protagonist's party, as she is required for a triple fusion with Uriel and Raphael to be performed, resulting in the creation of the "Angel Ring," a valuable item needed for the final showdown against Asura.

Once Uriel, Raphael, Michael and the Fake YHVH are defeated, the remaining elder reveals herself to be Gabriel, who was told to distance herself from the others by the orders of the real YHVH. If Aleph defeats the real YHVH on the path of Law, she states that he still has a purpose, and tells him to go to Eden.

Gabriel's design largely resembles her prequel incarnation, although she is now a woman. Most incarnations of Gabriel past this point uses her design from this game.

"One of the four major angels. She is also the only female angel at this rank. Her name comes from the Sumerian word for "governor"."
—Shin Megami Tensei III: Nocturne compendium

If the Demi-fiend is against Chiaki's Reason of Yosuga, he is forced to fight against Uriel, Gabriel and Raphael upon reaching the last level of Mifunashiro. Otherwise, he will fight Futomimi. Afterwards, Gabriel can be obtained by fusing a Throne with Raphael to get her. She also can be used in a sacrificial fusion with Raphael and Uriel, regardless of position, to create Michael.

Gabriel appears as one of the three alignment bosses players encounter during the later acts. Those that are on the law route will obtain her plug-in after defeating her. She is a special triple fusion of Raphael, Throne and Odin.

The true identity of Gabby, who reveals herself to the prentice Samurai at Shene Duque. She is fought as a boss in the DLC Challenge Quest, "Clipped Wings 2." During the battle, she comes to view that letting Flynn keep his gauntlet as a mistake. Midway through the battle, she will pose a question to Flynn. Either answer will infuriate her and makes the encounter more dangerous. Choosing to ignore her will cause her to lose a press turn. Shocked at Michael's loss, she is spared by M. who says that a single rat cannot do much. She warns Flynn that she will not forget his role before leaving.

A statue of Gabriel can be seen in the Diet Building in Nagatacho, radiating a green aura.

Gabriel is the Herald that protects residents in Shibuya with a seal. However, his seal is broken after Goshiki Fudo's revival, which leads to demons invading into Shibuya. He reveals himself after Ayato defeats the demon Morax there, and tells Ayato everything about himself, Yuuka and Baal's connections in their destinies.

Gabriel is fought in Amnesia on the Neutral, Light-Law and Dark-Chaos routes, where she guards the base in Shamim.

"Ruler of the Garden of Eden. Gave the Annunciation to the Blessed Virgin Mary."
—PSP profile

Gabriel is Eriko Kirishima's ultimate Persona, only accessible in the EX Dungeon. The protagonist needs the Lily Material Card before she can be summoned. Her appearance is that of a woman wearing a beige and green suit. Her wings and her hair are both made of pipes (reminiscent of pipe organs in churches). Like her older design, she still holds a lily in her right hand. Gabriel excels at ice and holy spells and is immune to those elements. Her ultimate spell, Release Jail, is the strongest ice spell in the game and makes her crucial to perform the ultimate ice-elemental Fusion Spell, Ice Jihad. She is also capable of using recovery skills but has a weakness against darkness and nuclear elements.

Gabriel can generate the Heart Item, Frozen Stone, which nullifies Ice damage directed towards the bearer.

"One of the four major angels. Because she is depicted as a beautiful girl, she is interpreted as female. Her name comes from the Sumerian word for "governor"."
—Persona Q: Shadow of the Labyrinth compendium

"One of the four major archangels. She is also the only female angel at this rank. Her name comes from the Sumerian word for "governor." She is the angel who told Mary of her pregnancy."
—Persona 5 background

Gabriel is the tenth Persona of the Temperance Arcana and can only be obtained through fusion in the Velvet Room. She is the first of three Personas to learn the Divine Judgment skill, the second of three to learn Ali Dance and the last of three that learn Evade Curse and Touch n' Go. She is also one of the four Personas to learn the Ice Amp and Salvation skills. When itemized through Electric Chair execution, Gabriel yields a Mabufudyne skill card. Gabriel is one of the Personas needed to summon both Michael and Sraosha through advanced fusion.

Gabriel is the third guardian that the party must face on the Path to the Holy Grail in the Qliphoth World, with the title "Declarer of Anguish."

"This city isn't my city... Where is the savior? Where is the millennium? I thirst... I must quench this thirst!"
—Gabriel, Digital Devil Saga: Avatar Tuner 2

Five years ago, members of the Karma Society captured four devouring angels. Their minds have eroded to the point that they start questioning if they're human. But then their demon memories kicked in, which ran parallel to Shin Megami Tensei II, including the building of the Millennium Kingdom and turning betrayers to stone. Then they would attack because they can't control their thirst. Should the party pursue them, Serph and company fight Gabriel, Raphael and Uriel twice, once when the party finds them by themselves; and once in a single battle, facing each one of them and then finally Michael, one at a time.

Gabriel resides in the Karma Society Tower on the Heliport at floor twenty. Her skillset involves a wide range of status ailment inflicting skills including skills such as Wicked Curse, which inflicts damage and places the Curse status ailment on the entire party before following up with Mamudoon. She is weak to Force-based skills. When she is at critical HP, she will tell the party, "Be warned... Your foe still remains..." and start using random skills rather than set patterns.

Gabriel as he appears in Shin Megami Tensei

Gabriel as she appears in Shin Megami Tensei: Devil Summoner

Gabriel as she appears in Persona 2: Eternal Punishment 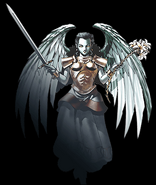 Gabriel as she appears in Persona 3

Gabriel as it appears in Devil Children White Book

Gabriel's sprite as it appears in Shin Megami Tensei II

Gabriel's sprite as it appears in Shin Megami Tensei: if...

Gabriel as she appears in Shin Megami Tensei III: Nocturne

Gabriel as it appears in Last Bible III

Gabriel as she appears in Card Summoner

Gabriel as she appears in Persona 5 Royal

Gabriel as she appears in Persona O.A.