Valerie Arem
"Please extend a helping hand to your fellows... For the sake of this kingdom's new millennium..."
—Gabby, Shin Megami Tensei IV

Gabby is a character from Shin Megami Tensei IV.

Gabby wears a white priestess robe with blue trim, leaving only her face and hands visible.

Gabby is a nun and Abbot Abbot Hugo's right-hand in the Monastery of Mikado Castle. Her past is a mystery and her appearance hasn't changed over the years, leaving some who once fancied her to find it eerie. She tells the Samurai in the emergency meeting that a quest to capture the Black Samurai can be found on the blackboard in K's Tavern. A Samurai reveals that she was the one who came up with the mission to go to the Counter-Force Demon Base, while Hugo was simply the one who ordered it.

A monk reveals that she is the one who brought up a public execution for the Black Samurai, with Hugo simply taking charge of it. She remains silent during the execution and the reveal of the Black Samurai resembling her. The next day she asks the prentice Samurai to come to the Monastery and forbids them to speak of it to anyone else. She asks that they save three of their fellows from a prison at Shinjuku National Park in Tokyo, saying that they are needed for the future of the kingdom. When the three men are rescued, she thanks them for their work in saving them and tells them soon the country will no longer need to fear demons.

Gabby informs the prentice Samurai that the Black Samurai has resurrected and that knowledge of it has been kept secret from the public on her orders. She requests that they kill the Black Samurai in Tokyo. She can be talked to in Obelisk Plaza after giving the mission, stating that the Black Samurai took her appearance to mock her and that the three men they rescued are closer to the creator, and their return will bring the kingdom back to itself. The Brotherly Samurai at K's Tavern mentions that she has been talking to Hope in secret from Hugo, and that the two monks haven't been speaking to each other recently.

Gabby has Hugo send a order to the Samurai to return to the kingdom and meet at the holy ground Shene Duque. In the ark found there she reveals her true form, Gabriel, alongside the new rulers of Mikado: Michael, Raphael and Uriel.

Gabby is the master of Aniel and has him send two Law-aligned Challenge Quests Taste of the Forbidden Fruit and Great Raven of the Underground on the Law Route. She reveals Azazel's location in the first quest and after his defeat she will contact Flynn, admitting that knowledge will set people free, but that freedom also causes suffering and that it does not necessarily lead to salvation. In the second she asks for Flynn to slay the Herald Mastema with the four archangels viewing his actions as extremely dangerous.

Gabby as she appears in Shin Megami Tensei IV -Prayers- 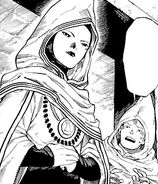