Fuu-Ki is a demon in the series.

Fuu-Ki (風鬼) whose name means "Wind Oni" is one of the four oni that was summoned by Fujiwara-No-Chikata (藤原千方) during the mid-Heian period. Fuu-Ki can harness powerful winds which it uses to blow away enemies.

"One of the four oni Chikata Fujiwara was said to have controlled during the Heian period of Japan. He could control the winds and blow all his enemies away."
—Shin Megami Tensei III: Nocturne compendium

Fuu-Ki is one of the four Oni that were part of the Mantra demons' elite force. But they made a mistake which angered Thor and they were forever banished from Ikebukuro. The once elite Oni group became mere petty thieves who mugged anyone going through their scattered hideouts around the Ikebukuro Tunnel.

Fuu-Ki's hideout is located in the out-of-the-way tunnel within the station close to Asakusa, riddled with trapped surfaces. If the Demi-fiend approaches him, Fuu-Ki will laud the former for going out of his way to get here, and will offer him a good time with some women in exchange for money (he's lying, of course and will pocket the money without doing anything). If the Demi-fiend refuses, Fuu-Ki will be angry and a fight will ensue. Throughout the encounter, Fuu-Ki will mention killing him as a big mistake, and considers himself "too important" to die for some reason.

Fuu-Ki can only be obtained through fusion. He appears as a field boss on Shinjuku field when summoned by one of the charms the Yaksini NPC in Ichigaya Camp's B11 will trade for magnetite.

"One of the four oni controlled by Fujiwara no Chikata, it sends hurricanes to blow away its enemies. Some say that Fuu-ki is the original ninja."
—Shin Megami Tensei: Strange Journey compendium

Fuu-ki controls a Domain over a relic in Ikebukuro Station - East Entrance. Defeating him earns the relic Small Fridge, which is required for the Challenge Quest Relic Recovery: Small Fridge.

Fuu-ki are later encountered as normal enemies in Infernal Tokyo.

Fuu-ki is one of the first demons to attack Walter and a Casualry when they arrive in Tokyo. The Black Samurai arrives and defeats the demon before it can harm them.

Fuu-Ki can teach Nanashi the Zandyne, Fog Breath and Dark Sword skills through his Demon Whisper. He benefits from learning Force, Physical and support skills.

"One of the four oni controlled by Fujiwara no Chikata, it sends hurricanes to blow away its enemies.
Some say that Fuu-Ki is the original ninja."
—Shin Megami Tensei V lore

"One of the four oni controlled by Fujiwara no Chikata, it sends hurricanes to blow away its enemies. Some say that Fuu-Ki is the original ninja."
—Persona 5 background

Fuu-Ki is the second Persona of the Star Arcana and can be found as a Shadow in Kaneshiro's Palace and the Kaitul area of Mementos, with the title "Tornado Devil." He is the first Persona to learn Tetra Break along with being the sole source of the Wind Boost and Resist Psy skills. Fuu-Ki is also the first Persona usable in battle by the protagonist to learn Dodge Wind. When itemized through Electric Chair execution in the Velvet Room, Fuu-Ki yields a Wind Boost skill card.

Fuu-Ki appears as a mini-boss in Kaneshiro's Palace. When the Phantom Thieves use the communicator to separate the guards, the Shadow that reports to the monitor room will transform into Fuu-Ki when confronted. Fuu-ki also appears alongside Sui-Ki and Kin-Ki as another mini-boss encounter.

Yuya Uchimura's Shadow will also take the form of Fuu-Ki when confronted in Mementos during the quest "Ending the Boyfriend's Abuse." He can be found in the 3rd area of the Path of Chemdah and defeating him is necessary to continue the Fortune Confidant with Chihaya Mifune. Shadow Uchimura resists Physical attacks and Gun attacks, and does not have a weakness to Electric skills. He will also use the Swift Strike skill to attack after attempting to buff with Tarukaja.

Fuu-Ki as he appears in Shin Megami Tensei III: Nocturne

Fuu-Ki as he appears in Shin Megami Tensei IMAGINE 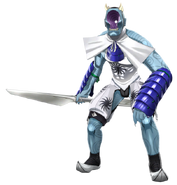