Futsunushi, also known as Futsunushi no Ookami, is a demon in the series.

Futsunushi-no-kami (経津主神) is a Shinto deity of swords. He is regarded as the personification of the sword Futsu-no-mitama.

"The Nihonshoki sword deity who pacified Ashihara no Nakatsukuni. His name comes from "futsu," the fashion in which things are cut, and "nushi," his nature as a god."
—Devil Summoner: Soul Hackers 3DS compendium

Futsunushi once again appears in Persona 4 Golden and is required to fuse Magatsu Izanagi via a triangle spread fusion.

"The Nihonshoki sword deity who pacified Ashihara-no-Nakatsukuni. His name comes from "futsu," the fashion in which things are cut, and "nushi," his nature as a god."
—Persona 5 background

Futsunushi is the ultimate Persona of the Magician Arcana and can only be obtained through fusion in the Velvet Room upon the completion of the Magician Confidant. He is the first Persona to learn Ali Dance, one of four to learn Regenerate 3, and one of two to learn both Firm Stance and Brave Blade. When itemized using Electric Chair execution, Futsunushi produces the Brave Blade skill card.

Futsunushi is also required in order to summon Yoshitsune using an advanced fusion.

Futsunushi as he appears in Card Summoner

Futsunushi in Devil Summoner: Raidou Kuzunoha vs. The Soulless Army

Futsunushi as he appears in Devil Summoner: Raidou Kuzunoha vs The Lone Marebito

Futsunushi as he appears in Persona 4 The Golden Animation 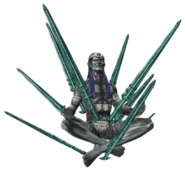 Futsunushi in Persona O.A. (No Background)