Frost Ace is a demon in the series.

Frost Ace was the central character in the first part of IMAGINE's seventh anniversary event. Players joined a Jack Frost NPC on a ride up an elevator when he suddenly transformed into Frost Ace. After his transformation he attempts to take on Alice, who easily swats him away. He later attempts to fight another Frost Ace, only for that Frost Ace's true identity to be the Mother Harlot, who easily beats him in her Frost Ace disguise. When she is weakened by the battle with the human players, a second Frost Ace appears, defeating her and avenging his fallen comrade.

His boss theme "(燃える！フロストエース, Moeru! Furosutoēsu)?" is reminiscent of tokusatsu sentai show and even received a parody opening movie with lyrics on one of the event's special pages. According to a 4Gamer interview with IMAGINE's composers, Frost Ace's theme was primarily inspired by theme songs used in 1970's tokusatsu and henshin anime, specifically Kamen Rider Stronger, Devilman and Yatterman.

By defeating him, players were able to acquire his plug-in item to perform a special double-fusion of Tam Lin and Jack Frost to create him.

He was later added as a boss fight in Abyss Tower where he had a chance of dropping his transformation belt, a piece of equipment that boosted expertise gain for players.

"Thirsting for revenge, Jack Frost donned his Ice Vest to become the dark hero known as... Frost Ace. What will his sorrow frozen heart choose? Will it be Vengeance? Mercy? The gears of Fate continue to toy with him..."
—Shin Megami Tensei: Strange Journey compendium

He first appears as a lowly Jack Frost in Sector Carina's basement mourning his family. He begs the protagonist to get him an Ice Vest so he can become powerful and get revenge; upon obtaining it, he transforms into Frost Ace and grants his benefactor the Frost Ace Special Fusion and the Frost Cannon before leaving to seek vengeance. His special fusion consists of Jack Frost, Tam Lin and Power.

"Jack Frost after he donned his Ice Vest and transformed into a superhero.
Little is known about him, but rumors says he was involved in a tragic incident and now burns with vengeance, though his heart is still frozen in sorrow. As Fate toys with the dark hero, what path will be choose? Mercy? Or vengeance?
Still unable to come up with an answer, he continues his long battle, hiding that cool, cute face of his behind the mask."
—Shin Megami Tensei IV compendium

Frost Ace can be summoned through special fusion using a combination of Jack Frost, Tam Lin and Power. He can teach Flynn the Mabufula and Purple Smoke skills through his Demon Whisper.

Frost Ace can be fused through a special fusion of Jack Frost, Tam Lin and Power. He can teach Nanashi the Mabufula, Purple Smoke, Hamaon and Bufudyne skills through his Demon Whisper. Frost Ace benefits from learning Ice and Light skills.

Frost Ace can be ranked fuse six times in order to have him rank up to King Frost.

"A A hero of the snowmen clan who flies to the rescue when summoned for help."
—Demonary, DemiKids

Known as Icy Ace in the game. He can perform the Ice Combo Blizzard with J. Frost. Icy Ace also knows another Ice Combo Freeze Wave, which is performed with King Icy. Icy Ace serves as the Military for DemIce. 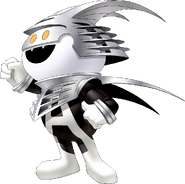 Frost Ace's artwork as it appears in Devil Children 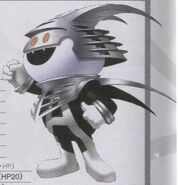 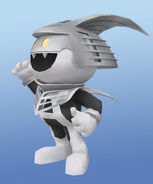 Frost Ace as he appears in Shin Megami Tensei IMAGINE
Community content is available under CC-BY-SA unless otherwise noted.
Advertisement