Flare
Freyr (フレイ, Furei)? is a demon in the series.

Freyr (sometimes anglicized as Frey, from "lord") is one of the most important gods of Norse paganism. Freyr was highly associated with farming, weather and, as a phallic fertility god, Freyr "bestows peace and pleasure on mortals". Freyr, sometimes referred to as Yngvi-Freyr, was especially associated with Sweden and seen as an ancestor of the Swedish royal house.

Freyr, also known as Flare, appears in Megami Ibunroku Persona as a Persona of the Magician Arcana. It is Yuka Ayase's Ultimate Persona. In order to fuse him, the player needs the Stuffed Deer Totem. Being returned to the Velvet Room at MAX Rank, Freyr produces Caesar Leg, the strongest leg armor in the game. 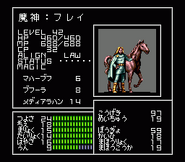 Freyr from the Sega CD remake of Shin Megami Tensei.]]
Community content is available under CC-BY-SA unless otherwise noted.
Advertisement