Rhetorician of the Sea (P5)

Forneus is a demon in the series.

According to the writings in The Lesser Key of Solomon, Forneus is the thirtieth demonic spirit listed in the Ars Goetia. He is a Great Marquis of Hell with twenty-nine legions under his command, partly comprised of the order of angels and thrones, and appears as a sea monster. When summoned, he can make men well-versed in rhetoric, give them a good name, teach them foreign tongues, and make them trusted by friend and foe alike.

His name seems to come from "fornus" (oven). He can take many different forms but mainly prefers his human form.

"Origin: Israel. One of the 72 demons of the Goetia. He was one of the Thrones who fell from grace. He appears as a silver sea monster, but can take the form of a human as well. He grants knowledge of various arts and sciences to hims summoner. He can also change the hatred of one's enemies to something like friendship."
—Shin Megami Tensei A-Mode DDS dictionary

"One of the 72 demons of the Goetia. He appears as a great sea monster. He is skilled in languages and is a master of rhetoric."
—Shin Megami Tensei III: Nocturne compendium

Forneus is the first boss, fought in the Hospital when the Demi-fiend reaches the exit. A Decarabia in Shibuya claims to be Forneus' friend and is annoyed by the latter's supposed tardiness, although there is no given explanation for their friendship.

Forneus is the boss of the Fourth Sphere of the Womb of Grief. He swears to avenge Amon by fighting Alex, but chooses to settle with the protagonist when he makes it to Forneus before she can.

Forneus' attacks are mainly physical and ice-based. His signature Death's Bite hits random targets 4 times, and he telegraphs this by using Charge. Once he hits half health, he unleashes Abyssal Prison, which is a field effect that lets him auto-cast Abyssal Scream at the end of every turn for 3 turns, inflicting Fear across the party.

Despite all this, he shouldn't be so tough. At this point, if one has been diligent with gathering D-Sources, Luster Candy and Debilitate should be easily acquired. His weakness to Gun Skills makes it easy for the protagonist to constantly exploit his weakness. Fight conservatively, though, as the protagonist gets into another boss fight immediately afterwards.

After his defeat, Forneus surrenders the Fourth Fruit. He also becomes available for fusion and unlocks the way forward. Forneus' fusion requires Decarabia, Kikuri-Hime and Sui-Ki. He leaves behind the Spotted Leather forma, which is used to create the Sub-App Co-Op Enhance C, which allows Co-Op attacks to trigger on critical hits.

Shortly after he retreats, though, Alex appears and attacks the protagonist.

Forneus appears regularly in the early story missions as a boss and as support for demons such as Eligor in his boss instance.

"One of the 72 demons of the Goetia.
He appears as a great sea monster and is skilled in many languages in addition to being a master of rhetoric."
—Shin Megami Tensei V lore

Forneus appears in the 3DS remake as a demon unlocked in Nemechi's cat form and can be purchased for 100 D-Souls. He is the earliest demon available with access to Makakaja.

"One of the Goetia's 72 Demons, he appears as a great sea monster. He is linguistically skilled, and a master of rhetoric."
—Persona 3 compendium

Forneus can be obtained via fusion, or through Shuffle Time in the second block of Tartarus, Arqa. The special non-mythological relationship with Decarabia is rendered again in this game, in which these two personas are able to perform a combo skill called Best Friends.

"One of the 72 demons of the Goetia, he appears as a great sea monster. Known as the great Marquis of Hell, he is skilled linguistically, and is a master of rhetoric."
—Persona 5 background

Forneus is the seventh Persona of the Hierophant Arcana and can be found as a Shadow in Shido's Palace and the Sheriruth area of Mementos, with the title "Rhetorician of the Sea." He is one of four Personas to learn the Survival Trick passive skill and the only source of the Evade Psy skill. When itemized with an Electric Chair execution in the Velvet Room, Forneus yields the Masukunda Skill Card.

Forneus also appears as the second boss of Shido's Palace, and is the manifestation of one of Shido's allies, a Former Noble.

Forneus will appear after defeating lone Isoras in the northern tunnels of the Samsara Tunnels.

"One of the 72 demons of the Goetia. When summoned it appears as a large winged fish or similar sea creature. This creature is especially well veersed, teaching its summoner the art of rhetoric. One who masters Foreus' craft is able to convince even the most stubborn minds."
—Shin Megami Tensei: Liberation Dx2 compendium 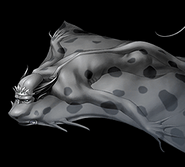 Forneus' artwork as it appears in Persona 3

Forneus as he appears in Last Bible III

Forneus as he appears in Shin Megami Tensei III: Nocturne.

Forenus as he appears in Persona O.A. 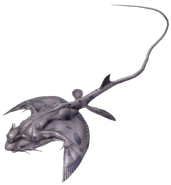 Forneus as he appears in Shin Megami Tensei: Liberation Dx2.