Flauros is a demon in the series.

Flauros is the 64th demon spirit of the Ars Goetia. He is a great duke and appears at first as a mighty terrible and strong leopard but at the command of his summoner he assumes the shape of a man with fiery eyes and a terrible countenance.

He can see the past and future, but unless he is commanded into a triangle he will lie in all those things. He will gladly talk of divinity and of the creation of the world, and of his and other spirits' falls from grace.

He can control fire and burn all of his and his summoner's adversaries to death and will not suffer them to be tempted by any spirit or otherwise. He governs 36 legions of spirits.

"Origin: Israel. One of the 72 demons of the Goetia. He was once one of the Powers in Heaven. He appears as apanther to his summoners and will incinerate their enemies with flames."
—Shin Megami Tensei A-Mode DDS dictionary

Flauros makes his first and only non-Fallen appearance as an angel dubbed Flauros Hallel fighting alongside Chiaki Hayasaka after she has assumed the form of the Baal Avatar. There is no way to recruit this form of Flauros into the Demi-fiend's party.

Flauros' Fallen form, however, appears throughout the game, even before the aforementioned fight, as an enemy in random encounters.

Flauros acts as the final boss of the main story's Distortion instance. In completing the Distortion instance for the first time, players obtain the ability to fuse him. He's a special double-fusion of Queen Mab and Uriel or Scathach.

In the End of Days Ichigaya instance, he appears as the third boss fight after Mother Harlot and Abaddon as Flauros Hallel alongside Ose Hallel. After obtaining his plug-in, it is possible to fuse him in a special double-fusion of Flauros and Throne.

"One of the 72 demons of the Goetia. He appears as a leopard and can see the past and future. He can control fire and burn all his adversaries to death."
—Persona 3 compendium

"One of the 72 demons of the Goetia. He appears as a leopard and can see the past and future. He can control fire and burn all his adversaries to death."
—Persona 5 background

Flauros is the third Persona of the Devil Arcana and can only be obtained through advanced fusion in the Velvet Room. The ability to fuse Flauros is unlocked at Rank 1 of the Strength Confidant, which can be started by talking to the twins starting on 5/18. The task they give the protagonist is to show them a Jack Frost with Mabufu, which he learns at level 12. The protagonist must be at least Lv.25 and have the Personas Berith, Andras and Eligor in order to fuse Flauros. Flauros is one of three Personas to learn Dormin Rush and the first to learn Dodge Phys and Heat Up. When itemized through Electric Chair execution, Flauros produces the Shackles accessory, which grants the wearer the Null Rage skill.

As part of the Strength Confidant, Caroline and Justine wish to see a Flauros with the skill Tarukaja. Flauros' base components for fusion innately possess this skill, so no special preparations are necessary aside from collecting them. Doing so promotes the Confidant to Rank 5.

"One of the 72 demons of the Goetia. He appears as a leopard and can see the past and future. He can control fire and burn all his adversaries to death."
—Persona 5 background

Flauros is now the second Persona of the Devil Arcana, having swapped places with Andras. While Flauros remains essential to the progression of the Strength Confidant, he is now the Persona needed for the Strength Confidant's Rank 3 level up, rather than the previous Rank 4. The protagonist now must be at least Lv.19 and have the Personas Berith, Eligor and Orobas in order to fuse Flauros.

Flauros can only be created through Relic fusion, first as Flauros Zombie, which can then be fused with his soul to become Flauros. Flauros is an angel in the Tower of Babel, where he appears on the third floor whenever Akira touches the side of the partially invisible pathway, sending him back where he came and either reducing his HP or losing his demons as an act of revenge for walking down the path he created.

"One of the 72 demons of the Goetia, appearing as a leopard-faced warrior.
He has the power to see the past and future. He can also control fire and burn anything his summoner wishes."
—Devil Survivor 2 compendium 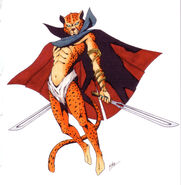 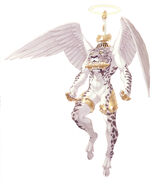 Flauros as he appears in Devil Survivor 2 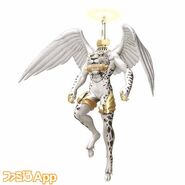 Retrieved from "https://megamitensei.fandom.com/wiki/Flauros?oldid=404129"
Community content is available under CC-BY-SA unless otherwise noted.