Fafnir is a demon in the series.

Fafnir was the son of the dwarf king Hreidmar, and the brother of Regin and Ótr in Norse mythology.

After Ótr was killed by Loki, Hreidmar received the cursed gold of the dwarf Andvari's as repayment for the loss of his son. Fafnir and Regin then killed their father to get the gold, but Fafnir decided he wanted it all, becoming a dragon (symbol of greed). Regin then sent his foster-son, Sigurd, to kill the dragon. Sigurd succeeded by digging a pit under the trail Fáfnir used to walk to a stream and plunging his sword Gram into his heart as he walked past. Regin, however, corrupted by the curse on Andvari's gold, planned to kill Sigurd to take the treasure for himself, but Sigurd, having eaten part of Fafnir's cooked heart, was warned by birds of Regin's attack and ended up killing him.

"Origin: Scandinavia. An evil dragon defeated by the hero Siegfried. It's said that dwarven sorcerers transformed into a dragon to hold the gold of Rhein. It's said that one who bathes in Fafnir's blood can understand birds and repel steel. When Siegfried bathed in his blood, some leaves had stuck to his shoulders. These were the only areas the dragon's blood didn't touch, leaving him vulnerable."
—Shin Megami Tensei A-Mode DDS dictionary

Fafnir was implemented during the 2015 Halloween event and his plug-in could be acquired during this time. He is fused in a special triple fusion of Titan, Dwarf and Vouivre.

"An evil dragon of Norse lore. He was defeated by the hero Siegfried.
In the Volsunga Saga, he was a giant wyrm that spat out poison."
—Shin Megami Tensei: Strange Journey compendium

Fafnir appears as a random encounter enemy in Sector Horologium. He mostly appears in the basement floors and especially in the dark areas. His "mechanical dragon" appearance in this game is a key point in an EX Mission, The mecha-dragon's secret, where a part of him can be requested - either screws, scales or circuits - which will be made into a piece of equipment.

Fafnir can teach Nanashi the Poison Breath, Earthquake and War Cry skills through his Demon Whisper. He benefits from learning Physical, ailment and support skills.

"An evil dragon of Norse lore, it was vanquished by the hero Siegfried.
According to the Volsunga saga, it was extremely venomous, had legs like snakes, and shook the ground with every step."
—Shin Megami Tensei V lore

Fafnir is a member of the Nordic branch of Bethel and can be found as a common enemy in Da'at: Taito's Nordic section. He is one of the demons required to fuse Vasuki.

"An evil dragon of Norse lore.
He was defeated by the hero Siegfried. In the Volsunga Saga, he was a giant wyrm that spat out poison."
—Devil Summoner: Soul Hackers 3DS compendium

A Fafnir is necessary in order to fuse Zeed into the General Hagen.

"An evil dragon of Norse lore, with armored scales, a mighty tail, razor-sharp fangs, and poisonous breath. He was defeated by the hero Siegfried.
After eating Fafnir's heart, Siegfried gained the mysterious power to understand the language of birds. It is said the wisest person of this age gains the same ability."
—Devil Survivor 2 Record Breaker compendium

Fafnir appears as one of the downloadable demons in the game. It can only be fused using Hagen and Culebre.

"An evil dragon of Norse lore, it was vanquished by the hero, Siegfried. According to the Völsunga saga, it was venomous, had legs like snakes and shook the ground with every step."
—Persona 5 Royal background

Fafnir is the eleventh Persona of the Hermit Arcana, and can either be found during the Third Semester Arc within Maruki's Palace or otherwise available to be fused after 1/12. They can be found past the warehouse and stop appearing after the Counseling Room. As a Shadow, it is known as "Evil Voracious Dragon." Due to its unique set of resistances and lack of weaknesses, it can only be knocked down via Technical damage or Down Shot, and as it is a Savage Shadow it must be at low health before it can be negotiated with. A Fafnir also stands guard in front of the Blue Sorrow Will Seed.

Fafnir as he appears in Last Bible II

Fafnir as he appears in Last Bible III

Fafnir as he appears in Last Bible Special

Fafnir as he appears in Card Summoner

Fafnir as he appears in Persona: Tsumi to Batsu 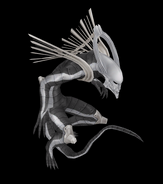 Fafnir as he appears in Shin Megami Tensei IMAGINE

Fafnir as he appears in Persona 5 Royal