A lock of Niko's hair

After the previous labyrinth is cleared

Inaba Pride Exhibit
"When I think of school, I think of a bright place with people I know. But when that same place suddenly becomes dark and empty, then it's scary... or creepy. ...I think I had the same feeling when I first saw Tartarus."
—Ken Amada

Evil Spirit Club is the third Labyrinth in Persona Q: Shadow of the Labyrinth.

The Labyrinth uses common imagery used in horror films with broken glass and flickering red lights. The first two floors take the appearance of an abandoned school building, with thematic puzzles relating to various classes, while the latter two take on that of an abandoned hospital. It culminates in the cast stumbling upon a surgery in progress.

The dungeon introduces aggressive F.O.Es that actively follow the party until they enter a different room. Scattered across various rooms are lights which can help the party control the F.O.Es' activity. They also become critical for certain puzzles where the party needs to use a Dark Key on a locked door without turning on the lights.

The F.O.Es in the Labyrinth are described as highly frightening, to the point that a usually stoic individual like Mitsuru Kirijo is scared by their sudden appearance.

Probably due to the horror theme, enemy encounters almost always start with an ambush, so it is recommended to have the battle navigator with the Snake Glare support.

The settings of the Labyrinth are heavily based on Rei's memories of wanting to go to an actual school and how she lived her last years in the hospital. The quotes the Kind Doctor spouts during battle may or may not reference her last moments until she passed away. 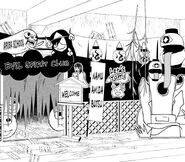