Empusa is a demon in the series.

The empusa, also known as empousa, was a female supernatural monster or demoness that appears in Greek mythology. Originally treated as a single demi-goddess (along with Lamia and Mormo) in myth, she was a species of monster that would be sent by Hecate to harass travelers.

Empusa was known to drink the blood of men and thus she could be accounted as a vampire recorded in Greek mythology. It scared to death or ate anybody that traveled along the paths or roads it inhabited. She appears as a beautiful woman, but her true form is an evil spirit that drains men's energy. She feasted on blood by seducing young men as they slept, before drinking their blood and eating their flesh.

The empusae are sometimes described as having donkey-like features. They were believed to usually appear with one prosthetic leg of brass and the other of a donkey. Empusa is pictured as wearing brazen slippers and bearing flaming hair. By folk etymology, her name was said to mean "one-footed," which gave rise to the iconography of a one-legged hybrid. Whenever a traveler addressed the empusa with insulting words, it would flee and utter a high-pitched shrill sound.

Kaneko's design and choice of pose for Empusa both draw inspiration from Lamia in Edward Topsell's History of Four-Footed Beasts. The image in question can be seen here.

Empusa can be found roaming in packs in Ichigaya field and at night in Ikebukuro. They appear as enemies in Suginami's Diaspora instance and within the Electric Corridor instance as support for Hecate.

Known as Empusas, she serves as the first boss encounter of the game, along with two Apep. All three can easily be one-shotted using the Earth Rise fusion spell.

"A vampire of Greek myth, known to serve the goddess Hecate. She appears as a beautiful woman, but her true form is an evil spirit that drains men's energy. They feed on human flesh."
—Persona 3 FES compendium

Empusa appearing in the 'Shin Megami Tensei: if... novel 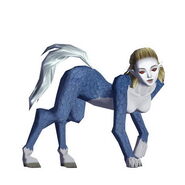