Eligor is a recurring demon in the series.

Eligos, also known as Eligor or Abigor, is the 15th demonic spirit of the Ars Goetia and a fallen angel. He governs over 60 legions of spirits. He is a great duke and appears in the form of a goodly knight carrying a lance, pennon (flag) and a scepter (a serpent to Aleister Crowley). Alternatively, he is depicted as a ghostly specter, sometimes riding a semi-skeletal (sometimes winged) horse, or the Steed of Abigor. This is a minion of Hell itself, and was a gift from Beelzebub. It was created from the remains of one of the horses of the Garden of Eden.

He can discover hidden objects, kindle love and lust, knows the future of wars and how soldiers should meet, along with procuring the favor of lords, knights and other important people. He is apt for divination and the performance of spells to strategize one's life. In modern military terms he is a high-ranking general who not only understands the subtle strategies of warfare, but also has the ability to foresee an enemy's position and tactics ahead of the battle itself.

He marshals armies and causes war. He teaches leaders how to win the loyalty of soldiers. According to the Grand Grimoire, he is a direct subordinate of Fleurety.

Miura summons two Eligor during his boss fight. Kei's friend also has one in their party during the same fight.

Eligor is found patrolling the Ginza underground mall. After entering the Assembly of Nihilo proper, he shows up to fight the Demi-fiend twice; he will appear once more if the Demi-fiend opens a specific chest, and summons a different group of demons to assist him each time. Despite Eligor's boss status, he can be fused before he is fought. Eligor later randomly appears in random encounters in Asakusa and the Labyrinth of Amala.

Eligor appears as the final boss of the Kingdom instance in Suginami Tunnels. Like other Fallen, he must be defeated before a player can enter the final battle with Seth.

"One of the 72 demons of the Goetia.
He takes the appearance of a knight and has the power to see things to come. He also possesses great knowledge of many wars."
—Shin Megami Tensei V lore

Eligor appears as a boss in Nagatacho. After the Angels send the protagonist to defeat the demons of chaos, he can be found overlooking the Diet Building on a high ridge to the west. He will engage the protagonist in battle as a warm up once they meet.

Eligor is the first Persona of the Tower Arcana.

Eligor is the sixth Persona of the Chariot Arcana. He can be obtained via Shuffle Time in the Steamy Bathhouse within the Midnight Channel.

"One of the 72 demons of the Goetia. He looks like a knight and has the power to see things to come. He also knows much about war."
—Persona Q compendium

"One of the 72 demons of the Goetia. He looks like a knight and has the power to see things to come. He also knows much about war."
—Persona 5 background

Eligor is the second Persona of the Emperor Arcana. He initially appears as a guard in Kamoshida's Palace, and is one of the first midbosses of the game; referred to as the "War-hungry Horseman." After the Palace is destroyed, he can be found in Mementos in the Path of Chemdah. He is the first Persona to learn the Memory Blow Physical skill. When itemized via Electric Chair Execution, Eligor yields a Tarukaja skill card. Eligor is one of the Personas required to summon Flauros through advanced fusion.

"One of the 72 demons of the Goetia. He looks like a knight and has the power to see things to come. He also knows much about war."
—Persona 5 Strikers background

Eligor is a Persona of the Emperor Arcana. He will be the subject of one of Lavenza's requests, in which she wishes to see an Eligor with the Divine Grace skill. This can be achieved by fusing Ame-no-Uzume in the Velvet Room using Lamia and Orthrus, then leveling her until level 29 when she learns Divine Grace. Following this, the protagonist can fuse Eligor by fusing Ame-no-Uzume with Lilim. As Eligor does not learn any healing skills to benefit from the Divine Grace skill, one may want to give him one of Ame-no-Uzume's skills or pass the skill on through fusion later.

Known as Wartak, he is a demon seen throughout the game. He gives demons or items as a reward every time 50 demons are reached in the Demonary or when correctly answering quizzes. The first 50 is a Paramese, at 100 a Loc Boost+, at 200 he gives 5 Chip+ that increases stats, etc. Every time the protagonist reaches a certain point in the game, he moves closer to the protagonist. Wartak is also a C-Rank BattleNet opponent. Defeating him 13 times earns a Tik Tok and beating him 19 times earns an Arachnia.

The demons he gives changes depending on the game. After collecting all the demons possible from both versions and talking to him, he will then join as the last demon to make the list complete.

Eligor has the same role as he did in Light/Dark Version, but now he gives ten questions in his quizz sections instead of five.

Eligor appears as a human who ambushes Serph in the Karma Society Tower by shooting him in the side. Additionally, he carries the Divine Ring if the party defeated Metatron and returned his Cell to the Karma Temple in the first game.

"One of the 72 demons of the Goetia. He appears as a knight holding a lance or pennon. The story goes that when Eligor is called upon in battle, he will see through the enemy plans and predict the moves that are to come."
—Shin Megami Tensei: Liberation Dx2 compendium

Eligor fights alongside two Andras in the main quest The Angels' Request. 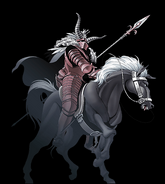 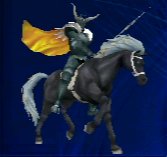 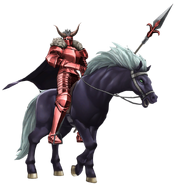