"I listen to a bit of everything so that I can hold up my end of conversations with my patrons, but I personally like jazz (both modern and standard)."

Gin is very lackadaisical, and friendly to many people. He knows Yuzu for having been in many concerts where Haru plays, himself being Haru's unofficial guardian figure. According to him, he describes himself as Kaido after seeing the error of his ways once he met Aya a long time ago. He is still in love with Aya even after she went missing; a truth Gin tries to hide from Haru so she doesn't get even more depressed.

The manager of the local live house, known as "Gin" (pronounced with a soft 'G,' after the alcoholic drink, not the Japanese word for silver, which is pronounced with a hard 'G'). Although he worries due to being unable to open shop after the power outage in Tokyo, he seems to enjoy the confusion at times. He used to date Aya, D-VA's keyboardist, before she went missing half a year ago. He's still searching for her. Depending on the protagonist's choices, Gin can use the information he received about Aya (which is, in fact, false) and follow it, thus falling into Azuma's trap and being lynched, if the protagonist didn't come in time to help him.

Gin will decline the protagonist's offer to escape the lockdown, declaring that he will simply open his bar and await whatever fate arrives him.

If the protagonist does not help Gin investigate the Shomonkai, he will join the Shomonkai in battle against the party after Azuma promises information concerning Aya's whereabouts.

Gin is not seen during this route.

Gin only appears at the end of this route. After witnessing the demons return to the server, Gin is relieved as he comments about the demon invasion's end.

Gin only joins the protagonist's party if his route, Song of Hope, is chosen. For that to be available, he must survive the battle with Azuma. He wishes to restore Tokyo to the way it was before the demon invasion.

Gin only appears during Yuzu's 8th Day, Man's Decision. He is essential to helping the remaining Devas restore the barrier. His demon, Take-Mikazuchi, will agree to take Jikoku's role in upholding the barrier against the demon world. The protagonist must protect Gin from Belberith's minions as he readies the barrier with Jikoku's sword.

Gin has balanced stats, though with a slight focus towards Strength. This stat distribution makes him about as versatile as (and a suitable substitute for) Atsuro in combat. His initial Magic stat is also high enough to utilize certain useful curse and healing spells when he joins the party. However, his availability is extremely limited, being playable only on his own route.

If the player makes the correct choices, Gin confronts Azuma here to gather information on Aya's whereabouts. This, however, is a set-up, as he is surrounded by Shomonkai members shortly after. The protagonist's party must assist him; ignoring this battle will render the Song of Hope ending inaccessible. 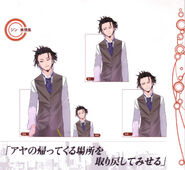 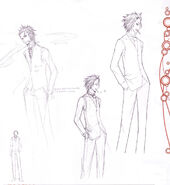 Gin in the manga adaption