Dwarf is a demon in the series.

A dwarf is a creature from Germanic mythologies and fairy tales. It usually has magical talents, often involving metallurgy.

The original concept of dwarves is very difficult to determine. The sources closest to the original Germanic mythology come from Norse mythology, but even these are scarce and varied. Sources have gradually given dwarves more comical and superstitious roles. Dwarves were certainly humanoid, but sources differ over their height, their lifestyles, and their similarity to elves. Considering early sources, and considering the dwarves' nature, original dwarves seem fully human height. They had strong associations with death: paled skin; dark hair; connections with the earth; their role in mythology. They followed animistic traditions, showing similarities to such concepts of the dead.

As their mythology evolved, the most changes have had them become more comical and more mysterious. They adopted the modern image of short height and ugliness. Their associations with the underground became more predominant. Dwarves were magical creatures with huge skill at metallurgy, taking fame for making great artifacts of legend. Late Norse concepts of dwarves became quite different from the early ones. The Legendary saga shows the new trend. The remnants of the original dwarf formed later fairy tales and folklore. They had become unseen magical creatures like fairies; users of charms, curses and deceit.

Modern fantasy and literature have formed an intriguing web of concepts, from that of the original dwarf, to the dwarf of later Norse mythology, the dwarf of folk-tales, and of other mythology. The typical modern dwarf has distinctive features such as short stature, excessive hair and skill at mining and metallurgy.

"Origin: Scandinavia. Small earth spirits of Norse mythology. They tend to be greedy and skeptical, and have excellent forging skills. They are known for creating a number of weapons and magical items. They may be small, but they also have great strength."
—Shin Megami Tensei A-Mode DDS dictionary

"Elements of the earth who appear in Norse mythology and other traditions. They are most often depicted with short bodies and long beards. Dwarves excel in crafting weapons, armor, and other accessories. They are greedy, and will never perform a task for someone else without payment. They are a warlike race, skilled in arms, with strength that far exceeds that of humans.
The dwarves are responsible for creating the chain Glepnir, which will be used to bind Fenrir after he swallows Odin. They also forged Mjolnir, the hammer of the thunder god Thor.
Today dwarves can be founds in countless comics, games, and other fantasy-themed works. Following the example of the old Norse myths, they usually appear as blacksmiths and craftsmen."

Dwarf can be found as a regular spawn on Shibuya and Shinagawa fields. He also appears as an NPC in Shinjuku Babel and Ikebukuro. These NPCs can offer a loss-less repair service, tutorials on modifying weapons, quests to unlock the swordsmith and armsmaker chain expertise, and spiritual infusion and diffusion services.

"A small spirit of Norse lore. The original spelling is Dvergar. They live below the ground and are skilled craftsmen, good at sculpture and architecture. They are excellent blacksmiths as well and create many weapons for the gods."
—Shin Megami Tensei: Strange Journey compendium

After Horkos attempts an attack on the Red Sprite, a Dwarf will take up residence in the room that Mastema was found in earlier. He will ask the protagonist to procure materials for him to forge equipment in a few EX Missions.

For the first mission, Forge! Forge!! Forge!!! I, he will ask that the protagonist bring him a Cursed Lance and 2 AT Carite II. After obtaining the materials, the protagonist will get a message several moon cycles later that the weapon will be ready to be picked up. Upon returning, the Dwarf will grant him the Hawthorn Spear, which has the highest Attack power of weapons available at that point.

Dwarf is a shopkeeper in Stage 2, hidden by the candle switches. He has vending machines that sell his products in other stages.

"A small spirit of Norse lore. The original spelling is Dvergar.
They live below the ground and are skilled craftsmen, good at sculpture and architecture. They are excellent blacksmiths as well and create many weapons for the gods."
—Shin Megami Tensei IV profile

Dwarf can be found in the 4th and 5th stratums of Naraku. He can teach Flynn the Tarukaja and Lunge skills through his Demon Whisper. Dwarf is needed to fuse Fortuna through special fusion.

Dwarf can be found within the initial southern areas of the Fairy Forest. He can bestow the Lunge and Head Crush skills during Demon Whisper.

"Bearded demon whose creative hands can mold just about anything it desires."
—Demonary, DemiKids

Dwarf has the power EarthHoard. 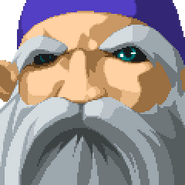 Dwarf as it appears in Last Bible Special