Durga  is a recurring demon in the series.

In Hinduism, Durga or Maa Durga (meaning "Mother Durga") "one who can redeem in situations of utmost distress" is a form of Devi, the supremely radiant goddess, depicted as having ten arms, riding a lion or a tiger, carrying weapons and a lotus flower, maintaining a meditative smile, and practicing mudras, or symbolic hand gestures.

An embodiment of creative feminine force (Shakti), Durga exists in a state of svātantrya (independence from the universe and anything/anybody else, i.e., self-sufficiency) and fierce compassion. Kali is considered by Hindus to be an aspect of Durga. Durga is also the mother of Ganesha and Kartikeya. She is thus considered the fiercer, demon-fighting form of Shiva's wife, goddess Parvati. Durga manifests fearlessness and patience, and never loses her sense of humor, even during spiritual battles of epic proportion.

Durga appears as Yukino Mayuzumi's ultimate Persona. In order to fuse her, the party needs the Bisonskin Drums totem. After being returned to the Velvet Room at MAX rank, Durga will produce Infinity, the most powerful weapon for Yukino.

Durga appears in the 35th chapter of the manga, summoned by Yukino in the fight against Queen Asura where she defeated the Night Queen in one blow with her Wolf Fang attack.

Durga appears again as Yukino's ultimate Persona, and awakens after Yukino heeds her mentor Shunsuke Fujii's dying wish for her to pursue her dreams. After Jun Kurosu defected from the Masked Circle and lost the ability to use his Persona, Yukino gave up her Persona-using ability to reawaken his, allowing him to use Durga as well, albeit with inferior affinity.

While Yukino will call out Durga's ultimate move, Thunder Inferno, Jun will not. Once Durga has reached Max Rank, she can be returned at the Velvet Room for Kali's Material Card, Skull Necklace.

Durga as she appears in Persona 2: Innocent Sin 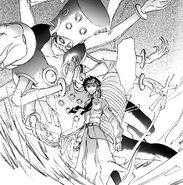 Durga as she appears in the Megami Ibunroku Persona manga

Durga's sprite in Shin Megami Tensei II and if...

Durga as she appears in Card Summoner
Community content is available under CC-BY-SA unless otherwise noted.
Advertisement