General
"No matter how many of you come at me, it'll turn out the same. You can't beat a human turned demon! That's right, Tayama...! You know your precious Tokyo? I'm going to smash it all up!"
—Dullahan, Shin Megami Tensei IV

Dullahan is a demon in the series.

The Dullahan, also known as Dulachán or Gan Ceann, is a type of unseelie faerie from Celtic mythology. It is headless, usually seen riding a headless black horse and carrying his head under one arm. The head's eyes are massive and constantly dart about like flies, while the mouth is constantly in a hideous grin that touches both sides of the head. The flesh of the head is said to have the color and consistency of moldy cheese.

The dullahan's whip is actually a human corpse's spine, and the wagons they sometimes use are made of similarly funereal objects (e.g. candles in skulls to light the way, the spokes of the wheels made from thigh bones, the wagon's covering made from a worm-chewn pall). When the dullahan stops riding, it is where a person is due to die. The dullahan calls out their name, at which point they immediately perish.

"A ghost-like faerie of Irish folklore. Its sighting is an omen of death. It rides a coach called the Coiste Bodhar, pulled by headless horses, and stops in front of those destined to die soon. The Dullahan is headless itself, usually carrying its head under one arm. Though it is often portrayed as a headless knight, it is female in the original legend."
—Shin Megami Tensei IV profile

A Hunter who appears after the Challenge Quest Corpse Disposal reveals that he had been giving out red pills to people in an act of defiance against Tayama and the Ashura-kai. Furious that the prentice Samurai slayed them and are getting in his way of opposing Tayama, the Hunter eats a red pill himself and becomes Dullahan. Free of her anxieties and fears as a human, she gloats that they can't defeat a human turned demon. After her defeat, Flynn is given a choice to either kill her or spare her. Killing her earns Law points while sparing her earns Chaos points. Sparing her also has her run away.

"A distant relative of the Grim Reaper. Her visits are bad omens."
—Demonary, DemiKids

Can perform the combo Death Blade with Boltar. 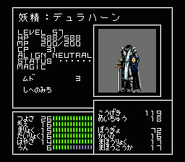 Dullahan as it appears in Last Bible Special
Community content is available under CC-BY-SA unless otherwise noted.
Advertisement