Dubhe (ドゥベ, Dube)? appears in Devil Survivor 2 as one of the seven Septentriones.

Dubhe is named after one of the seven stars in the constellation the Big Dipper.

Dubhe looks similar to an ice cream cone. The top of Dubhe is round and pink with holes in it and the bottom half is a multi-colored cone. Both halves are not connected to each other, and the bottom cone can spin at various angles without affecting the alignment of the top half.

It arrives on Sunday and is the first of the seven to appear. The pink round portion can enlarge before self-destructing in a large explosion, while its bottom cone is capable of regenerating the pink blob following a detonation. The anime also depicts Dubhe's top as being capable of firing small yellow shards that also detonate, as well as causing shockwaves.

On the 4th day, after the battle with the Megrez bud, it is theorized that Dubhe was a fully grown bud.

Dubhe is first seen on Sunday at 16:00 landing in-between a group of civilians. The Septentrione causes a few small explosions which causes the mass above its body to grow larger. The civilians try to figure out what the creature is when it causes a large explosion that incinerates all of them. The protagonist, Daichi, and Io are forced to flee after a notification from Nicaea warns them it is invulnerable to any attacks they can do.

Later in the day at 20:00 the Protagonist, Daichi, Io, and Yuzuru encounter the Septentrione again, shortly after Daichi finds a truck that could make traveling easier. Dubhe lands on the truck, forcing Daichi to drive off in a panic, leaving the rest to try and escape on their own. When collapsing rubble blocks off the party's remaining escape route, Dubhe begins winding up to cause another explosion. Daichi returns, and drives the truck off of a bridge down towards the mass above Dubhe's body, causing it to detonate prematurely and severely damaging Dubhe in the process. With nothing but its partial cone-like body, Dubhe becomes weak to everything besides Fire and Curse, allowing the group to take it out easily.

Despite it appearing that Daichi died in the ensuing blast from crashing the truck into Dubhe, Daichi survives by jumping out right before the truck crashes on Dubhe, and clings to a metal railing until he is helped by Makoto's men.

Dubhe instead makes its appearance on Sunday night, once again demonstrating its ability to cause detonation that kills many civilians. Hibiki, Io, and Daichi manage to escape the blast radius, only for Dubhe to begin attacking any moving survivors by using Binary Fire. While Io summons Ogre to help defend her and Hibiki from its bullets and shockwave, Hibiki's phone receives another death clip, showing Daichi dead in a crashed truck.

Soon after, Daichi appears from behind Hibiki and Io, and rams the truck he is driving into Dubhe. However, Dubhe appears unharmed by the impact. Hibiki's phone finishes downloading the Demon Summoning Program and activates, summoning Byakko which makes short work of Dubhe.

After Dubhe's defeat, Hibiki inspects the wreckage, only to find that Io's phone summoned another demon, Pixie, which has managed to haul Daichi away from the impact zone unharmed.

The fragment of Benetnasch holding both Megrez's and Dubhe's powers attacks by launching a large number of Megrez buds, each of which then develops Dubhe's explosive pink mass, causing an enormous explosion.

The initial half of the battle revolves around getting the teams to the exit zone on the other side of the map, but crossing over to that area will prove difficult due to Dubhe's attack range of 4. Fortunately, it will not move except when it wants to create distance between itself and your teams so that it can pick them off from afar. Position your teams just outside its attack range and let the other demon teams come towards you, and slowly shuffle them around until it is completely safe to cross through Dubhe's attack range in one turn.

If a team possesses a Beast, they could charge into Dubhe's attack range, engage an enemy team (maybe even Dubhe itself), and then use the extra Move command granted by Animal Legs to escape towards the exit, hopefully exiting Dubhe's attack range in the process. If you do have to engage Dubhe for this strategy, do so only with a team that resists fire, to minimize the damage that team takes.

Once Daichi weakens Dubhe, simply turn around and pursue it. Be aware that despite its sharply reduced stats, its Binary Fire attack can still do a fair bit of damage if it chooses to cast it.

Dubhe before getting hit by a flying truck

Dubhe after getting hit by a flying truck 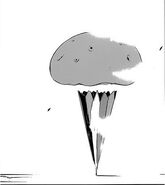 Retrieved from "https://megamitensei.fandom.com/wiki/Dubhe?oldid=389399"
Community content is available under CC-BY-SA unless otherwise noted.