Draug is a character from Tokyo Mirage Sessions ♯FE.

Draug is a recurring character in the Fire Emblem series, specifically the titles set in Archanea. He is a knight in the service of the nation of Altea and aids the Altean Prince Marth throughout his journeys.

A "Knight" Mirage, and Mamori's partner. Similar to Chrom, he comes from a different world and has lost his memories. He's a heavy-armored soldier that prides himself in his absolute defense and ability to support his allies. He transforms into an axe in battle and lends his strength to Mamori.

Before becoming Mamori's partner, a corrupted Draug takes control of Barry Goodman. After Barry is freed from Draug's control by Mamori's singing, and Draug is defeated in battle by Itsuki and the others, he is purified by Mamori's newly awakened Performa and becomes her partner at Barry's request.

Draug was previously Barry's Mirage partner, but after an intense fight with a Mirage years ago, their connection was severed, and the consequences of Draug's loss resulted in Barry leaving TERADETH.

Concept artwork of Draug as a General

Concept artwork of Draug as a Berserker 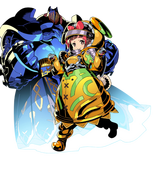 Artwork of Draug and Mamori from Fire Emblem Heroes by Yuji Himukai. 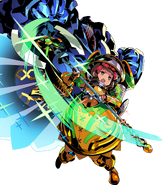 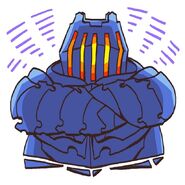 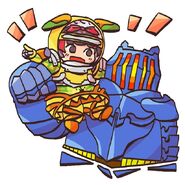