Dionysus is a demon in the series.

Dionysus is the ancient Greek god of wine, wine cups, wineskins, grapes and fertility. He inspires ritual madness, joyful worship, ecstasy, carnivals and celebration. He is sometimes included as one of the twelve Olympians. He was also known as Bacchus, the name adopted and used by the Romans to describe the frenzy he induced, bakkheia. In addition to wine-making, he is the patron deity of agriculture and the theater. Hailed as an Asiatic foreigner, he was thought to have had strong ties to the East and to Ethiopia in the South. He was also known as the Liberator, freeing one from one's normal self, by madness, ecstasy or wine. The divine mission of Dionysus was to mingle the music of the aulos and to bring an end to care and worry. Scholars have discussed Dionysus' relationship to the "cult of the souls" and his ability to preside over communication between the living and the dead.

In Greek mythology, Dionysus is made out to be a son of Zeus and the mortal Semele. He is described as being womanly or "man-womanish." The retinue of Dionysus was called the thiasus and was chiefly composed of maenads and satyrs. Dionysus is a god of mystery religious rites. One of the most famous mystery religions was the Eleusinian Mysteries, in which Dionysus may have had a minor role. In the Thracian Mysteries, he wears the bassaris or fox-skin, symbolizing new life. His own rites, the Dionysian Mysteries, practiced by maenads and others, were the most secret of all. Many scholars believe that Dionysus is a syncretism of a local Greek nature deity and a more powerful god from Thrace or Phrygia such as Sabazios or Zalmoxis.

The garland and the pinecone thyrsus are Dionysus' traditional symbols while the colorful pattern on his entire body can be interpreted in two ways. The first one is the body paint which symbolizes the revelry of Bacchanalia (wine festival). The other thing that links to that body paint is the colorful patterns of all kinds of alcohol when magnified under a microscope.

Dionysus is a triple fusion of Kali, Titan and Freya. He appears in the Second Home instance's Shinagawa route.

"The Greek god of wine and theater. He had two births.
He was originally a god of life protecting the mountains of Thrace. He taught humans how to make wine."
—Shin Megami Tensei: Strange Journey compendium

Dionysus is a demon that can only be acquired through fusion accidents which can be helped along with a Sub App that makes Fusion Accidents occur with 100% certainty, developed after the Black Box retrieval II EX Mission. He can be acquired easier through taking advantage of the Zealot Summons Sub App.

Dionysus makes an NPC appearance in Sector Bootes who initiates the EX Mission, Death distilled. He asks the protagonist to retrieve a feather from a Zhen to mix into a poisonous wine. Despite the wine's nature he claims that, as a god, he cannot be affected by such wine and desires a taste. After retrieving a Zhen feather, Dionysus remarks lamentably that he cannot share such wine with the protagonist and goes off to find a suitable meal to compliment the newly made wine.

A demon faced in the Challenge Quest "The Great Drunkenness," given by Nozomi. Dionysus is found in the Ginza Shopping District. Surprised that a man was intrigued by his wine, he offers his fellow oenophilist a chance to drink it in exchange for his life. Defeating him earns the Maenad's Wine for the quest.

After being defeated, he can be summoned through a special fusion of Naga, Mayahuel and Dantalian in the Cathedral of Shadows. He can teach Flynn the Purple Smoke and Doping skills through his Demon Whisper.

"The Greek god of wine and theater. He had two births.
Myth tells that Zeus took the premature Dionysus from his dying mother, Semele, and allowed him to mature inside his thigh so that the underdeveloped god might have a proper birth."
—Shin Megami Tensei V lore

Dionysus can be found in Ginza where his lifestyle gets him into conflict with Black Frost, who wants to steal his alcohol to sell in clubs he has planned. If the protagonist speaks to Dionysus, he will explain that Black Frost had been proclaiming himself as the new emperor of Ginza and trying to steal his alcohol. Supporting Dionysus will begin the quest "A Sobering Standoff" and request the protagonist deal with the troublemaker. Once Black Frost has been driven out of the area, Dionysus will join their party, provided that he isn't in it and space is avaliable.

"The Greek god of wine and theater. He was originally a god of life protecting the mountains of Thrace. He taught humans how to make wine."
—Persona 5 compendium

Dionysus is the ninth Persona of the Fool Arcana and can be found in the Depths of Mementos with the title, "Hedonistic Braggart." He is one of two Personas to learn the Thermopylae and Ailment Boost skills. When itemized through Electric Chair execution, Dionysus produces the Thermopylae skill card.

Dionysus is the seventh Persona of the Councillor Arcana in Royal. During a fusion alarm, Dionysus yields the Thunder Reign skill card.

"The Greek god of wine and theater. He was fervently worshipped by female mystery cults.
He was originally a god of life protecting the mountains of Thrace. He taught humans how to make wine."
—Devil Survivor 2 Record Breaker compendium

Dionysius is one of the first demons contracted by the party at the start of the Triangulum Arc of the game, the others being Sarasvati and Bai Suzhen. He is now the lowest-leveled and earliest-available member of the Omega race in the game.

"The Greek god of wine, theater and fertility. Also known as Bacchus, he was fervently worshiped by women. He is known for his teachings of grape harvesting, winemaking and the widespread teachings of the cult of Dionysus."
—Shin Megami Tensei: Liberation Dx2 compendium

Sprite in Shin Megami Tensei If.. 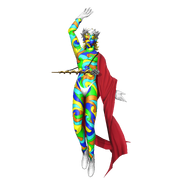