Digital Devil Saga 2 also adds in the 'berserk form', in which a character can enter a half-demonic state, transforming only a part of their body (typically their arm). They have more powerful abilities, but suffer from weakened defenses.

Directly following the events of the first game, Digital Devil Saga 2 focuses on the cast as they emerge from the Junkyard into the strange world promised as Nirvana. They find that the land has become uninhabitable due to the sun and the streets are lined with what appear to be human statues. Together, Serph, Argilla, Cielo, and Gale, as well as the newly introduced Roland seek to find answers for the existence of the Junkyard as well as the truth behind Nirvana. 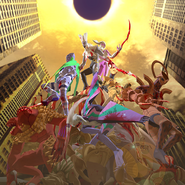 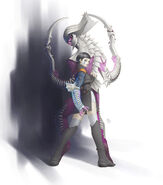