Chapter 5 The Day of Misfortune

Chapter 6 The Way of Kuzunoha

Chapter 7 Vow From The Abyss 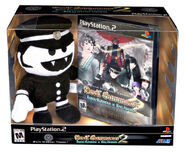 Retrieved from "https://megamitensei.fandom.com/wiki/Devil_Summoner_2:_Raidou_Kuzunoha_vs._King_Abaddon?oldid=49223"
Community content is available under CC-BY-SA unless otherwise noted.