During a routine investigation by the Narumi Detective Agency, Shouhei Narumi and his teenage apprentice Raidou Kuzunoha respond to a call for help from a client. When the client reveals herself to be Kaya Daidouji, she requests them to kill her. The two are baffled, but before they can ask why, mysterious men wearing red armored suits and capes kidnap Kaya and attack Raidou to halt his pursuit.

"We met a schoolgirl at Ushigome-gaeri Bridge who asked us to kill her (!?), but some Special Guards got in the way. I had Raidou investigate the girl; he pegged her as Kaya Daidouji of Ouran High. Our investigation led to her uncle Kiyoshi and another man at the manor. I assume Kiyoshi is after the inheritance, but he transformed and escaped before we could question him. For now, he's definitely our main suspect."
—Episode 1 Case File

Raidou investigates the Daidouji manor for clues before learning he must rescue Rin, a close friend of Kaya Daidouji. Raidou traverses into the Dark Realm and battles for the return of Rin. Once Rin is rescued she in turn relinquishes information about a curse within the Daidouji family. This curse causes spiritual possession that affects only females near their sixteenth birthday. Raidou then returns to the Daidouji manor to search its secret basement which is inhabited by demons, only to find Kaya’s diary detailing her abduction and imprisonment by her uncle shortly before her birthday. Raidou reports back to Shouhei Narumi with details about his investigation thus far. He then returns to the manor one last time to confront Kaya's uncle Kiyoshi, but Kiyoshi morphs into a demon and runs away. Afterwards, the mansion gets pulled into the Dark Realm and Ichimokuren appears. After the battle ends Raidou is taunted by an unnamed and unseen Devil Summoner. Upon returning to headquarters Narumi and Raidou strategize on what to do next. They decide to investigate their only lead: “The Red Caped Monster”.

"I sent Raidou to Ryugu to follow up on Tae's sighting of Kiyoshi, AKA Red Cape. He ran into Denpachi, a rickshaw runner who knows Kiyoshi. Denpachi had us find his sister Shizu (taken, alas). When we found her in the Red-Light District, she sent us after a car vandal. Jackpot! We found the Red Cape at Kurisu-zaka, except he was Denpachi (huh!?). Don't know what to make of the multiple Red Capes. (Where is Kiyoshi?)"
—Episode 2 Case File

Tae Asakura (a local reporter and friend of Narumi) stops by the Narumi Detective Agency to report a sighting of the Red Cape in Ginza-Cho, giving Raidou a photo as proof to help with his investigation. Raidou arrives at a cafe looking for witnesses when the owner recommends that he search out a carrier named Denpachi. Upon arriving in Fukagawa-Cho he is greeted by unfriendly thugs who suggest he enter the nearby bathhouse to request permission to search the village. After a nude showdown with two yakuza thugs, the boss Satake authorizes the search but warns to that the Red Cape has been frequently sighted. Raidou is confronted at Denpachi’s home by four Soldiers and pulled into the Dark Realm where he meets an imprisoned man he must help escape. After helping Denpachi escape he refuses to give information about the Red Cape unless Raidou finds his sister Shizu. Raidou then talks to Satake who informs him that Shizu is working in the Red-Light District in order to accumulate the funds to pay for his medical expenses after being attacked by The Red Cape. Raidou then travels back to Ginza for clues when he’s confronted by a demonic car who accuses Raidou of being the Red Cape that attacked him. After the battle, the car gives him a rickshaw knob that, according to Shizu, belongs to her brother. Afterwards, Raidou travels to Dark Ginza to battle The Red Cape only to find that it is in fact Denpachi. Denpachi's parting words are of the Daidouji Factory operated by Kaya's uncle Kiyoshi Daidouji. Tae then reports sightings all over the capital of The Red Cape.

"Raidou went out to Kiyoshi's factory in Senju-Ku. He made it through the Matrix Labyrinth and met Kiyoshi, but the guy transformed again. Some strange creature popped out of his back and flew away. Then Rasputin showed up, claiming to know about the Red Cape and the Hiruko, but all Raidou got out of his was a fight. If a Dark Summoner is mixed up in all of this, I'm inclined to let Kiyoshi off the hook for now."
—Episode 3 Case File

Raidou reports back what he has learned thus far and Narumi informs him that Tae was also heading for the Daidouji Factory. Once Raidou arrives he finds a cane that belongs to Kiyoshi Daidouji, then meets Tae before being greeted once more by the ominous unseen enemy from before. Six matryoshka begin to levitate in the room as the voice informs Raidou that unless he can retrieve the three colored shards from the Matrix Labyrinth he will not see Daidouji. Once the Matrix Labyrinth is done the seal on the door confining Kiyoshi breaks. Kiyoshi prepares to divulge all information on the Daidouji family, only to begin morphing back into The Red Cape, but dies as the entity disconnects from his body and escapes. Out of the shadows steps a figure identifying himself as the Dark Summoner Rasputin. He then informs Raidou that the entity he just saw was Hiruko, a demon that feeds on its hosts fear and anxiety and that Kaya is part of the next phase in his plan. Before leaving he summons one last demon from a matryoshka. Back at the detective agency the Herald of Yatagarasu stops in to warn Raidou about Rasputin saying the he was thought to have died fifteen years prior and is somehow still alive and also that the strongest of Devil Summoners is no match for a Dark Summoner.

Episode 4: The Case of the Missing Shipments

"Konnou-Ya hired us to investigate the freight disappearances at Harada & Co. (Seems unrelated, but we're in a bind if the shop goes under.) Raidou went to Harumi-Cho and found that Mr. Elfman has been smuggling in illegal immigrants. A quick visit to the Catholic Church reveal that Elfman is already dead. Naturally, Raidou fought Rasputin and defeated him. But, isn't Rasputin supposed to be dead too...?"
—Episode 4 Case File

"Rasputin told us about Kaya, and Tae had a story about a deserter, so we visited Kasumidai to find a connection. At Dark Kasumidai, we met Sadakichi, the deserter who contacted T. He told us about the Super Soldier Project and K's location at Canon Battery #4. At the Shipbuilding Facility, we met Munakata, saved K, and escaped. K has been hired as our secretary."
—Episode 5 Case File

"What a crazy day; Kaya and Raidou went on a hunt for the Irie Fudou. Kaya told us that millions would die if Munakata got his hands on it. They found it at a construction site in Ginza Cho--but then Kaya wigged out, stole the crystal, and performed the Ritual of Entry herself! She's gone with a trace. Even worse, she's cut her hair short. I like it much better long..."
—Episode 6 Case File

"The Navy Admiral was cursed, and Raidou accepted the curse himself. Even with that handicap, he defeated Hitokotonusi at Dark Fukagawa-Cho and returned safely. Sadakichi says that Munakata (big cheese General) was after the Admiral. One thing leg to another, and Sadakichi asked Raidou to infiltrate Waden One in Sakuradayama. ∗We want overtime pay. -G"
—Episode 7 Case File

Episode 8: The Demon and the Steel Tower

"Narumi went off on his own to investigate, but he's been missing ever since. Raidou and I met Munakata at the top of Waden One. We fought and defeated Mishaguji, the demon M called, but that rat of a summoner (Rasputin) crawled out and sent us through a space-time rift. (Note to self: fix earlier report on R's death. Seems he's a tough nut to crack...)"
—Episode 8 Case File

"Rasputin's spell took us to Tsukudo-Cho of the past (months, not years). There, we met "Raido" and "Goto" (very weird) and had the Herald of Yatagarasu help us gather prisms to form the Amatsu Kanagi. "R" helped us perform the Ritual of Soul-Sending at Ushigome-gaeri Bridge, and here we are back home. Narumi better get back soon; this typewriter is murder on my paws."
—Episode 9 Case File

Episode 10: The Capital in Flames!

"Martial law has been declared in the Capital, and Navy HQ has fallen to the Yomi-kugutsu. On a tip from Rasputin, Raidou went underground again via Kasuminomori, where he found me injured. We beat Munakata, who had been possessed by Sukuna-hikona, but now the Soulless God is on the loose in Harumi-Cho. It's way too big to fight (it's gotta be at least 400 meters tall!) so we've retreated for the time being."
—Episode 10 Case File

"We came up with a plan to destroy the Satellite Tai-itsu--the Soulless God's power source. Raidou went to the Amazing Science Lab and got Dr. Tsukumo to lend us his rocket. We pummeled Rasputin until he calculated the satellite's orbit for us. Our plan was to destroy the satellite from inside. Gouto and a demon gave their lives to destroy Tai-itsu, but it worked. The Soulless God has fallen. Poor little cat... We'll miss him."
—Episode 11 Case File

Episode 12: Bonds Between Us 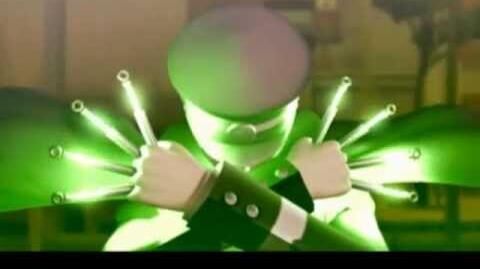 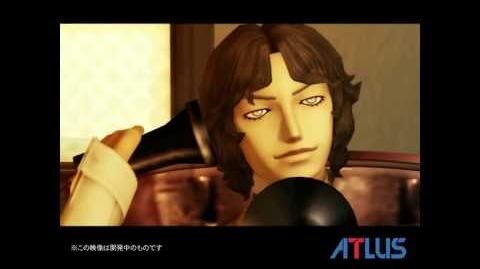