Devil Buster Busters, also abbreviated as DB Busters, are a demon in the series.

A duo of cool (and self-proclaimed invincible) demons who were formed to vanquish the Devil Busters (evil people) who bully demons. The belligerent older brother, Jack Frost[1], is armed with an assault rifle, a bulletproof jacket, and an iron helmet. In contrast, his feisty younger brother, Jack o' Lantern[1], wears a scouter-like lens on his head and holds an old-fashioned sword in his hand. It is said that they fight honorably day and night to make people swear that they "will never bully a demon again", though unfortunately, nobody has ever heard of them actually fighting off a Devil Buster. Don't go dancing in the clubs or anything, just do your best, Hee-ho Brothers!"
—Kazuma Kaneko Works V (translation courtesy of Bee Translations).

The Devil Buster Busters can be encountered in the Sewers below the city. They threaten the protagonist and demand that he release his demons. He is given a choice of threatening back or try to make peace with the duo. Either way the demons laugh at the hero and run away, either at his refusal to fight or claiming that it's his lucky day. If spoken to again, they ask the protagonist to swear to never bully another demon. Should the protagonist agree, the two will cheer for the defeat of another "evil" Devil Buster.

"Jack Frost and Pyro Jack have teamed up to teach humans who would pick on poor defenseless demons a lesson! Their official name is the "Devil Buster Busters." Pyro Jack leads the way, while Jack Frost follows along. They travel the land in order to get all self-proclaimed Devil Busters to promise not to pick on demons."
—Devil Summoner: Soul Hackers 3DS Compendium

The Devil Buster Busters reappear as a summonable demon exclusive to the 3DS remake, available after Nemechi evolves into the dango form (male growth path), and cost 150 D-Souls. They can absorb all manner of physical damage, and can put up Makarakarn to cover their vulnerability to magic.

A poster of the DB Busters can be spotted in the Mikage-cho subway, next to the Devil Summoner protagonist. 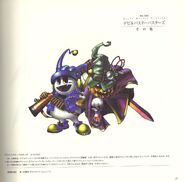 DB Busters as they appear in Card Summoner

Posters of the DB Busters and the Devil Summoner protagonist.