The Demonica, short for "DEMOuntable Next Integrated Capability Armor," is a device and a set of equipment featured in the series.

Unlike any previous game, Shin Megami Tensei: Strange Journey characters summon demons though the use of the Demonica, as opposed to the COMP of other Megami Tensei games. The Demonica allows the protagonist to summon, communicate with and transport demons, and also has several other functions, including it gaining experience, levels and stats, instead of the wearer. The Demonica initially starts by mysteriously receiving the Demon Summoning Program, which allows the protagonist to see the otherwise invisible demons within the Schwarzwelt. As the plot progresses, the protagonist and the crew of the Red Sprite gain several upgrades to the Demonica using the Rare Forma gained from the Schwarzwelt including, but not limited to: detecting more valuable forma, revealing invisible doors, unlocking races for demon fusion, and detecting invisible enemies. In negotiations, the Demonica can even convince demons about events that are not true, such as the protagonist being a beautiful woman.

Jack's Squad has a different model of Demonica. It is black and more combat-oriented albeit vastly inferior to the ones used by the Red Sprite team as supported by Arthur, comments from several Jack's Squad crew members, and the need of a Forma Search from the Red Sprite crew.

The base abilities of the Demonica, on top of allowing the crew to survive the harsh environment of the Schwarzwelt, is identification and analysis of the inhabitants of the Schwarzwelt. Enemies first appear as Unknown data forms, and must be defeated at least once so that the Demonica can analyze and identify their forms. In the meantime, any elemental affinities detected will be memorized by the Demonica.

Once analysis reaches level 1, the demon is identified, allowing the protagonist to communicate with it. Certain types of demons are open to conversation; other types will always refuse communication unless the player has equipped the Lunatic Sub-App to facilitate communication during a full moon.

Defeating more of the same demon, or finishing combat with the demon in the active party, raises the analysis level. At level 2, all of the demon's affinities are revealed. Level 2 analysis is also automatically attained by fusing or recruiting the demon.

Once a demon reaches analysis level 3, the player obtains its D-Source at the end of the next battle if that demon is also in their stock. A demon's D-Source will always contain up to three fixed skills, with a bonus skill randomly selected from the demon's own learned skills. The Double Scoop Sub-App can instead allow for two bonus skills in a D-Source. Reaching level 3 analysis also halves the Compendium cost for the demon, encouraging a player to use their new demon rather than immediately fuse it off.

The D-Source allows the player to impart skills that a demon cannot inherit normally through fusion, and may contain strong skills way before the player attains demons that learn them naturally. The player can only hold 1 copy of a D-Source at a time. Demons can re-issue their D-Source after the player has used them when they level up, albeit rarely, even with the Demon Juicer Sub-App that facilitates this process.

On a New Game Plus, D-Sources are not carried forward, but analysis levels are. Recruiting demons that have been previously fully analyzed will immediately grant the player their D-Source, allowing them to quickly fill up their D-Source reserves on subsequent playthroughs.

The Demonica also has Sub-Apps, programs that affect things such as battle frequency, prizes awarded from victorious battles and how your summoned demon's skills grow. Unlike regular programs, Sub-Apps only have a limited space to work with and only a few can be equipped at any time. In Redux, the Demonica has no maximum Sub-App capacity, letting the player enable as many as they need.

The Demonicas of the crew has different colored sleeves depending on a crewmember's role on the Red Sprite. Yellow sleeves designate members of the operations team and related teams while blue sleeves designate members relating to support teams such as the resupply team or the medical team. A red sleeve always denotes members of the strike team. The protagonist and Demonee-Ho seem to be the odd ones out, having white sleeves on their Demonicas, which are ambiguous to what they represent.

In this world the Demonica armor was built by Country A and Japan to protect soldiers who fought demons, and most of the ordinary suits are black ones. The Japanese Counter-Demon Force, under the government's Ministry of Defense Tamagami, adopted it to combat demons, making Japan the second-best nation at combating demons in the world.

The Demonica is introduced to Flynn and the other Samurai via the Black Samurai, who wears a Black Demonica. The gauntlets used by the Samurai were originally attached to Demonica suits, and is a feature that can be easily removed.

Two variations of the Demonica suit can be obtained in-game, but instead of serving as the COMP equivalent, the suit is simply armor. These suits also lack the adaptability of the ones shown in Strange Journey, as well lacking the ability to integrate apps and the summoning program with the entire suit. The Black Demonica can be gained for free when visiting the Counter-Demon Force Base in Kasumigaseki, while the original Demonica must be bought in three separate pieces (Helmet, Body Armor, Bottoms) at a special arms shop in Ginza.

A Demonica as it appears in Shin Megami Tensei: Strange Journey 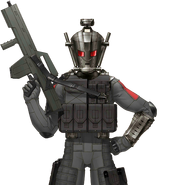 A black Demonica bust up as it appears in Shin Megami Tensei: Strange Journey

The Demonica helmet as it appears in the Schwarzwelt Reminiscences book.