Demonee-Ho is a demon in the series.

His name is a play on Demonica and the characteristic phrase of all Jacks, "hee-ho."

"He's finally here. The long-awaited rookie steps into the spotlight at last. With his trademark custom mini-Demonica, he's seen action all over the world, with a 100% success rate.
True heroes always show up late."
—Shin Megami Tensei: Strange Journey compendium

Another variation of the mascot demon Jack Frost. Demonee-ho is a parody of Strange Journey's protagonist with garments that resemble the protagonist's Demonica to a tee, including the white sleeve that is worn by the protagonist only.

Demonee-Ho is a password only demon that can be accessed when the protagonist reaches Lv.75. All three of Demonee-Ho's skills are unique. Because demon sources only have one bonus skill, this makes it very difficult to get these skills on any other demon.

One of Demonee-ho's skills, Desperate Hit, does random hits of Almighty-physical damage. When it hits the same enemy 3 or more times, it does the most unmodified (non-weakness, non-critical) damage out of any skill in the game. While the skill Breath is seemingly identical to Ice Breath, it inexplicably requires one additional MP.

Demonee-Ho appears multiple times in the Womb of Grief, once per floor, hosting a series of EX missions titled "Demonee-ho Boot Camp." For each, he challenges the protagonist to defeat certain demons under certain restrictions. All of his Boot Camp missions prohibit item use and summoning or swapping of demons.

His final lesson in the Sixth Sphere, Boot Camp VII, has him unmask his true form: Zaou-Gongen. Unlike the other Boot Camp missions, there are no restrictions to the fight. After this final defeat, both Zaou-Gongen and Demonee-Ho become available for fusion.

"Jack Frost equipped with his own mini-Demonica. Rumor has it that he participates in operations all over the world, and has a legendary 100% mission complete rate. He originally donned the Demonica because he admired it, but after long, hard training, he emerged as the perfect soldier. He may look like the cute Jack Frost everyone knows and loves, but underestimate him and he'll make you laugh or cry."
—Shin Megami Tensei IV compendium

Demonee-Ho controls a Domain in the Roppongi region that is over the Harajuku Police Station. Defeating him earns the relic Firearm Box. A virtual Demonee-Ho appears in a Challenge Quest Training Battle, where he acts as a virtual drill sergeant to Counter-Demon Force Soldiers. He activates the elemental absorption mode on his armor, which makes it so all attacks are drained by him except ones that are repelled, which deal damage to him. Beating him earns Demonee-Ho's approval, stating that Flynn is now a member of the Counter-Demon Force and that even if he dies he will live forever as part of the group.

The fusible version of Demonee-Ho can only be created through a special fusion with Kresnik, Cu Chulainn and Frost Ace. Due to carrying his own rifle, he can use the Shoot command instead of Attack, giving him a Gun-type normal attack rather than a Physical-type. Again, he learns Breath as a distinctive Ice-type attack capable of hitting one more time than Glacial Blast. However, this move is not passable through Demon Whisper or normal fusion; to have other demons possess the move, Fusion Lite is the only way to do so.

Demonee-Ho can be summoned through a Special fusion of Frost Ace, Cu Chulainn and Kresnik. He can teach Nanashi the Iron Judgement, Smile Charge and Desperate Hit skills through his Demon Whisper but the skills Blank Bullet and Breath cannot be passed on in any way. Demonee-Ho benefits from learning Physical, Gun, Ice and Almighty skills. 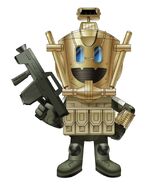 Demonee-Ho as he appears in Shin Megami Tensei: Strange Journey. There are some slight differences to the original in the rounding of edges on the Demonica and gun. 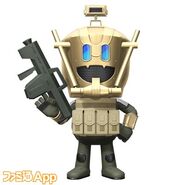 Demonee-Ho as he appears in Shin Megami Tensei: Liberation Dx2 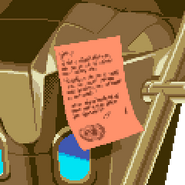 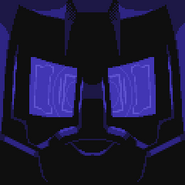 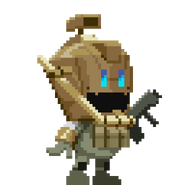 Demonee-Ho as he appears in Shin Megami Tensei: Synchronicity Prologue