Dark Elf is a demon in the series.

Dark elves are a modern invention of modern fantasy works, including Dungeons and Dragons.

However, Norse mythology does tell of "Dark Elves" (Dökkálfar) who live underground, in contrast to "Light Elves" (Ljósálfar) who live in a heavenly abode of their own. It is possible that what the Norse describe as black elves are what we would identify as dwarves, or perhaps goblins or kobolds. 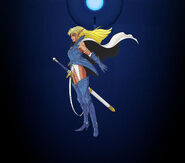 Dark Elf as she appears in Shin Megami Tensei II.