Daphne is a demon in the series.

Daphne is a Nymph and a minor nature deity in Greek lore. She was the daughter of either the river god Peneus or the river Ladon. She was pursued by Apollo who was in love with her due to being affected by Eros' arrow. Begging her father or Gaia for help, they turned her into a laurel.

Another variation of the myth exists where Daphne is a mortal girl pursued by Apollo. In any version of the myth it ends with the laurel becoming sacred to Apollo.

"A nymph of Greek lore who turned herself into a laurel to escape Apollo's pursuit. Affected by Eros' arrow, Apollo chased Daphne for days. When he had almost caught her, she prayed to Peneus, her father the river god, and was transformed into a laurel."
—Shin Megami Tensei: Strange Journey compendium

Daphne can teach Nanashi the Dia, Rakukaja and Makakaja skills through her Demon Whisper. She benefits from learning ailment, healing and support skills. 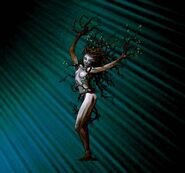 Daphne as she appears in Shin Megami Tensei: Devil Summoner

Daphne as she appears in Card Summoner
Community content is available under CC-BY-SA unless otherwise noted.
Advertisement