Reuben Langdon
Dante is a recruitable guest character from the Devil May Cry franchise.

Over two thousand years before the events of the first game, the Legendary Dark Knight Sparda betrayed the Demon King Mundus and his demonic army, sealing away the demon world from the human world along with most of his power into his sword sharing his name, which would later revert into the Force Edge.

Though many of his actions are shrouded in uncertainty, Sparda, later in the human world, would fall in love with a human named Eva who would later give birth to Dante and his twin brother, Vergil. Dante would obtain his sword, Rebellion, as a keepsake from his father, while Vergil would obtain the sword, Yamato. Both brothers would also obtain two amulets which together could unlock the seal within the Force Edge, and thus, the seal between both worlds.

While Dante and Vergil were children, his family came under attack by Mundus' demons. Eva was killed and the two brothers were separated. This event would eventually cause Dante to become a devil hunter and open his business as a result, believing that he would eventually find who was responsible sooner or later.

Dante's demonic heritage grants him many abilities and his exploits since opening Devil May Cry are many, including stopping his brother from endangering the human world in his bids for power and sealing Mundus away for a second time.

Personality wise, Dante appears to be a mix of his Devil May Cry and Devil May Cry 2 incarnations, with the same somber, reserved personality he possessed in the second game while also appearing to have a sense of humor and excitement similar to the first game. This is best expressed in his wry amusement over the irony of a demon hunter being hired by a demon, calling it "the joke of the century."

Even so, Dante goes through with it, intending to see how the ultimate war against God in this chaotic world would eventually play out.

His battles with the Demi-fiend seem to bring out a large amount of enthusiasm from Dante not seen in Devil May Cry 2. In their first fight, Dante takes the time to ask the Demi-fiend if he's "having fun," following it up with an excited "me too." This bears more of a resemblance to his personality in Devil May Cry and even later games, expressing excitement at the conflicts he has.

"A demon hunter who ventured into the Vortex World. He wields his two guns, Ebony and Ivory, along with his trusty sword, Rebellion. It is said that he has the blood of the legendary demon warrior Sparda in him."
—Shin Megami Tensei III: Nocturne Compendium

Dante is one of several new additions to the Shin Megami Tensei III: Nocturne Maniax re-release. In the later Shin Megami Tensei III: Nocturne Chronicles re-release, Raidou Kuzunoha the XIV from Devil Summoner 2: Raidou Kuzunoha vs. King Abaddon replaces Dante as the recruitable character. In the HD Remaster editions Raidou is the default, but the player has the option to have Dante reprise his role with the purchase of the Maniax Pack DLC.

Dante is first mentioned in pre-Conception Tokyo, where he is described by a passerby as a "strange foreigner wearing a red cloak and carrying a big sword." After the Conception, he survives, and his role of being a demon slayer comes into light. Dante makes his first formal appearance after the Demi-fiend escapes the Shinjuku Medical Center, where he observes how different Tokyo looks from what he originally heard (according to him, the current state of Tokyo doesn't look like a place where one would get sushi).

He would later show up in Ikebukuro, territory of the Mantra demons. After the Demi-fiend prevails in the Mantra's court of strength, the Candelabrum of Sovereignty starts to flicker wildly. Noticing the change, the Demi-fiend soon sees Dante, who leaps down from the highest level of the tower and suddenly forces him into battle.

After a brief exchange, Dante loses the drive to fight for the moment and takes an interest towards the Demi-fiend, as the latter doesn't seem to be like any demon he has encountered before. Dante reveals that he was hired by an "old man" to hunt down some demons, including the Demi-fiend. He also holds a Candelabrum in his possession, but was never told what it was for. Dante then proceeds to tell the Demi-fiend to keep himself alive, as the former would like to experience the thrill of the hunt again when he becomes stronger.

Dante slowly became suspicious of his employer's motives, and begins investigating the Labyrinth of Amala on his own. Upon venturing to the Third Kalpa, the Demi-fiend will encounter Dante once again, and the latter attempts to convince him to turn back. If he says no, Dante will begin to chase and attack him throughout the Kalpa, playing a practical cat-and-mouse game where he resets door switches and guards exits for the next two levels. If he catches the Demi-fiend, Dante will attack him or his minions, then retreat. The Demi-fiend would then find himself back at the entrance hall, where Dante will taunt him from afar. He would then engage him in another battle should the latter slip through his fingers. Following a final encounter, Dante launches one last attack but intentionally avoids stabbing the Demi-fiend, instead impaling the adjacent wall. After explaining his reasons for doing so, Dante hands over the Candelabrum in his possession, dismissing it as "nothing but junk." He would then go on ahead to resume investigating the Labyrinth of Amala.

Upon the Demi-fiend's entry to the Fifth Kalpa, Dante will be waiting within and would begin explaining the details he gathered about the old man's actual intentions. He would then offer his services to the Demi-fiend, as he no longer feels like continuing to perform the dubious tasks asked of him by his former employer. If he decides to hire Dante, the latter would flip the same double headed coin from Devil May Cry 2. Should the Demi-fiend call tails, Dante would take half of his total Macca. But if he calls heads, he will only have to pay Dante a paltry sum of 1 Macca. Dante will remain on standby at the entrance of the Fifth Kalpa if the Demi-fiend decides not to hire him just yet.

Dante's presence is permanent upon joining the Demi-fiend's ranks. He can never be fused with any demon, and despite having an entry in the Demonic Compendium, Dante cannot be summoned from there during a New Cycle.

After joining the Demi-Fiend's party, Dante effectively no longer has a role in the story other than being another party member and his ultimate fate is never shown in any of the endings.

In Shin Megami Tensei: Liberation Dx2, Dante appears as a guest character alongside Nero and V who are also from the Devil May Cry series.

In the Nocturne HD Remaster, Son's Oath is updated to make all of Dante's physical and physical-Almighty attacks to bypass resistance, immunity, and absorption. This fixes a discrepancy between the original appearance of Dante and Raidou, who are otherwise identical. 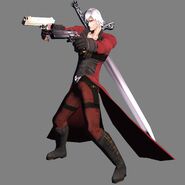 Dante as he appears in Shin Megami Tensei III: Nocturne 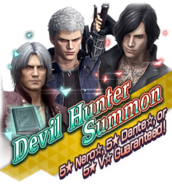 Retrieved from "https://megamitensei.fandom.com/wiki/Dante?oldid=386546"
Community content is available under CC-BY-SA unless otherwise noted.