Hierophant
"It is my duty to save those who have gone astray... Let me be your guide. Receive my salvation... Accept your death!"
—Daisoujou, Shin Megami Tensei III Nocturne

Daisoujou is a demon in the series.

Soujou (僧正) in historical East Asian regions is any high ranking Buddhist monk appointed by the government in power, in order to manage all the Buddhist temples and monks within the sovereignty's domain. In Japan, Daisoujou (大僧正) is the top official to hold this position, and there might be two to three more Soujous under Daisoujou depending on the time period, they are Kendaisoujou (権大僧正), (simply) Soujou, and Kensoujou (権僧正).

Daisoujou is also a title given to a highly virtuous monk who has attained Buddhahood during his lifetime. Among those named as Daisoujou is the founder of Shingon Buddhism, Kuukai (空海) who was conferred to such title posthumously.

Daisoujou's design is based on the Buddhist mummies, Sokushinbutsu (即身仏, literally "Buddhist monk preserved as is"). These monks performed self-mummification by starving themselves for about three years. At the end of these three years, they were entombed alive with just enough room to sit crosslegged. A tube was placed in the ground, leading to the tomb for air. The monk had a bell with him and every day, someone would listen for the bell to make sure the monk was still alive. When the bell no longer rang, the air tube was removed and the tomb was completely sealed. A thousand days later, the body would be exhumed. If it was preserved, it was revered as a god and were said that one will appear in front of people on the day of salvation.

"Origin: Japan. A title given to a highly virtuous monk who has attained Buddhahood during his lifetime. Among those named as Daisoujou is the founder of Shingon Buddhism, Kuukai."
—Shin Megami Tensei A-Mode DDS Dictionary

Daisoujou is one of three rare and difficult fiend bosses that can be found hidden throughout the game. If the protagonist beats him, he has a slim chance of dropping the Reaper's Bell, the most powerful Chaos-aligned weapon in the game.

"A monk who died while fasting for the sake of people. Because of his spiritual power, his body continues to exist without rotting. It is said that he will appear in front of people on the day of salvation."
—Shin Megami Tensei III: Nocturne compendium

Daisoujou appears as a boss in Shin Megami Tensei III: Nocturne. After the Demi-fiend's meeting with Gozu-Tennoh, a soul in front of the Mantra Headquarters in Ikebukuro will mention a "strange monk" in the eastern part of the city. Should the Demi-fiend then travel to that area, he will be summoned to another realm by Daisoujou, where the fight will take place. He will insist upon the futility of the Demi-fiend's efforts, believing in the absolute power of the rules laid for humanity. Upon defeat, he will drop the Candelabrum of Eternity.

Afterwards, the Demi-fiend will be able to fuse Daisoujou by using a Deathstone, an item found in the Labyrinth of Amala. In order to fuse Daisoujou, the resulting demon should normally be of the Night race and be fused during 5/8, 6/8, 7/8 or FULL Kagutsuchi. According to the tidbit in the strategy guide for Nocturne, his supposed reason for taking a Candelabrum was to bring the salvation of death to all humans.

Daisoujou is a reoccurring boss within IMAGINE. He appears as the summon orb boss of Ichigaya Camp's bronze-level instance. During new moon, he can be summoned by players of the law alignment by entering certain regions of Ueno's Kuchinawa Cave. He can also be encountered through a D-Egg summon or in Nakano Stone Site's gold-level instance, where players can obtain the ability to fuse him. He is a triple fusion of a Mou-Ryo variant, Matador, and Yatagarasu.

Daisoujou, along with the other Fiends that held Menorahs and the Demi-fiend, are set to appear as part of the Return of the True Demon DLC pack. As before, defeating Daisoujou unlocks the ability to fuse him.

"A monk who died while fasting. His spiritual power allows his body to continue to exist without rotting. It is said that he will appear before people on the day of salvation."
—Persona 3 compendium

To acquire the Daisoujou, the protagonist must perform a pentagonal fusion with Mithra and the four Mitama Personas (Saki Mitama, Nigi Mitama, Ara Mitama and Kusi Mitama). Fusing Daisoujou is also necessary to complete one of Elizabeth's Requests.

Daisoujou returns as a Persona of the Hierophant Arcana. He also retains his signature move Samsara, although it cannot be passed on to any other Personas.

"A monk who died while fasting, his spiritual power allows his body to exist without rotting. It is said that he will appear before people on the day of salvation."
—Persona 5 background

Daisoujou is the sixth Persona of the Hierophant Arcana and can only be obtained through fusion in the Velvet Room. He is the only Persona to learn the Samsara skill and one of three Personas to learn the Bless Boost and Null Rage skills. Additionally, Daisoujou is the first Persona usable by the protagonist to learn the Diarahan skill. When itemized through Electric Chair Execution, Daisoujou will yield a Makouga skill card.

In order to fully capitalize on Daisoujou's Samsara skill, Hama Boost will be needed, as Bless Boost and Bless Amp only affect the damage infliction skills. Fusing Horus with Take-Minakata is an easy way to transfer the Hama Boost skill to Daisoujou. 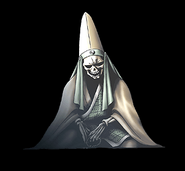 Daisoujou as he appears in Shin Megami Tensei III: Nocturne 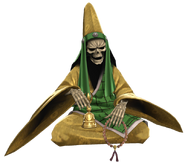 Daisoujou in Persona O.A. (no background)