Dairoku Tenmaou, also known as Rokuten Maou and Demon King, is a recurring demon in the series.

Within the Gohonzon, a revered mandala in Japanese Buddhism, the "Dai-roku-ten-maou" (第六天魔王) or the "Demon King of the Sixth Heaven/Sixth Heaven Demon King" symbolizes the lust for power and the desires to attain worldly goals. As the demon king with a great number of minions under his wing, the Maou works to tempt Buddhists from practicing the teachings of Buddha. The "Sixth Heaven," also known as Takejizaiten, the Japanese translation of the Sanskrit name Paranirmitavasavarti, is the realm where the demon king resides, thus he himself is also known as Takejizaiten or Takejizaitenjin. He is ultimately derived from the evil being Mara of source Buddhist lore and the adaptation of Mara into Japanese Buddhism. This title is also referring to Oda Nobunaga, a 16th Century warlord known for his eccentric personality and cruelty in battle, who self-proclaimed himself as this particular title.

The demon model in Innocent Sin is based on the warlord Oda Nobunaga himself, and traces of the samurai look and the fiery texture around his armor (possibly referring to the Honnō-ji incident) is seen in Kanji's ultimate Persona.

Known as Demon King, it is a common enemy in Mt. Katatsumuri, the Abandoned Factory, and in the Persona Thief quest. He cannot be obtained as a Persona.

Known as Rokuten Maou, he is Kanji Tatsumi's ultimate Persona that can be obtained by maximizing the Emperor Arcana Social Link. It inherits the stats from his initial Persona, Take-Mikazuchi, while upgrading its Electricity resistance to Null and losing the Wind weakness.

Rokuten Maou is Kanji Tatsumi's second-tier Persona and can be obtained by completing his Social Link. Rokuten Maou gains a +1 bonus to each of its stats and can Null Electricity skills and gains a added resilience to Physical skills, but retains its weak to Wind skills. Prior to Take-Mikazuchi's evolution however, they can learn Evade Wind from Emperor Rank 10, allowing Kanji a better degree of protection against Wind Skills.

Talking to Kanji after January 10th will cause Rokuten Maou to transform into Takeji Zaiten.

Rokuten Maou in Persona 4 The Animation 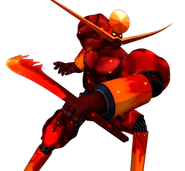 Rokuten Maou in Persona Q: Shadow of the Labyrinth