Xander Mobus
"My Godslayer will kill every last God and Demon out there!"
—Dagda, Shin Megami Tensei IV Apocalypse

Dagda is the supreme god in Celtic mythology. His name means "the good god," good as in good at everything, as opposed to morally good. Dagda is said to be a god of the earth, knowledge, and fertility as well as much more. He is portrayed as being armed with a magical club. During the battle against the Irish aboriginal, Fomorians, Dagda is injured and begins to live a reclusive life. His positions are succeeded by his brother Nuada and daughter Brigid.

Dagda is cynical, condescending and loud-mouthed, bearing a strong hate towards the Law, Chaos and Divine Powers factions. He is also shown to be manipulative, being able to manipulate Nanashi to unsealing Krishna of the Divine Powers to plan their downfall, even if he refuses to do so. He also tends to look down on Nanashi, treating him as a pawn, with most of their conversations being mission-based. Despite this, he seems to trust Nanashi in fulfilling his Godslayer mission, but just treats Nanashi's allies as disposable objects and encourages him to think in the same way. He acts as the fifth faction of the game out of Law, Chaos, Divine Powers and Humans. Ultimately, his plan is executed in order to put an end to YHVH's manipulations by dethroning him, as the disgraced god has been deemed too tyrannical to rule the universe properly, and Lucifer was merely a patsy opposition for YHVH as opposed to his previous incarnations.

Dagda first met Nanashi in the underworld, after Nikkari, Manabu and himself were all killed by Adramelech. He informs Nanashi that he is currently in Yomotsu-Hirasaka, and states that he has died, and that his friend, Asahi, would soon follow him. Dagda claims that Nanashi has accomplished nothing in his short life, but that together the two of them could change that. Dagda says that he will revive Nanashi, if he agrees to work with him. Not agreeing with this deal will result in an automatic Game Over. If Nanashi agrees, and Dagda revives him, leaving behind green markings on his left hand, cheek and Nanashi's eyes turn green. Dagda states that he is now his personal Godslayer, and will commit "deicide" as his puppet, though he later says that Nanashi doesn't necessarily have to be obedient to him, except if the player makes certain choices during the game Dagda will seize control of Nanashi's body, saying that Nanashi is nothing more than his puppet, and force a certain choice upon him, regardless of the player's wishes. After resurrecting the young cadet, Dagda enters his smartphone to observe him during his battle against Adramelech, repairing the smartphone to allow him to summon and recruit demons to his aid.

Throughout the course of Nanashi's journey, one learns that Dagda's ultimate goal is to kill all gods and demons, believing that divine power had corrupted them, and he would be no exception. To that end, he needed a pawn, that being Nanashi, who could destroy them, as a Godslayer has the power to kill all godly beings, unlike other entities who can only seal one another away.

Once Nanashi reaches the penultimate floor of the Cosmic Egg, Dadga will ask him how he will dispose of it. He must either destroy it or use it create a new world. Danu will appear and intervene with Dagda, telling him to reconsider his actions and embrace all life, so humanity may foster their own growth and development. Dagda rebukes her that humanity is imperfect and must ascend to a higher degree. Danu then proceeds to question Dagda about what he is doing and he responds that humanity but surpass god, which he dismisses "God" as merely "a word." All of Nanashi's partners will then join Danu to make him reconsider. Dagda then reminds Danu of their origins, and asks Nanashi to choose for them; either to recreate the Universe with the egg (Accepting Dagda's deal) or destroy it (Rejecting Dagda's deal). Choosing the former will lock Nanashi in the Massacre Route and the latter locks him in the Bonds Route.

If Nanashi states that he will destroy the Cosmic Egg, Dagda chooses to take back the life he granted to Nanashi, telling him he can regret his decision after being on the brink of death once again. If Nanashi had been acting cruel to his friends during prior events of the story, Dagda will also forcibly dismiss all of Nanashi's demons (even the ones in stock) and force him to fight alone.

For the first few turns, Nanashi's life will drain away, and his demons sometimes won't listen to his commands. Dagda declares that he wants Nanashi to die as quick and painlessly as possible. Danu, however, saves Nanashi by creating a new Dagda using the new powers she gained from assimilating with Inanna's remnants, in order to sustain Nanashi's life; much to Dagda's horror and revulsion. The double announces his intentions to save mankind and Nanashi's life, intending to help him restore balance; even leaving Nanashi's free will as it makes him more powerful while requesting him to eliminate the original who he views as "single-minded" per his duty as a Godslayer. Dagda spites the new version, seeing him as a weakling dependent on others for everything and that is not how he wants to live as an individual; he then curses Nanashi for choosing to turn on him, believing that Nanashi has condemned himself to a lowly existence. Having grown tired of the defiance, he demands Nanashi to show him his resolve. Dagda fights Nanashi to the full extent of his abilities but is still defeated, admitting he knew that Nanashi would more likely choose this path and that he still ultimately got what he wanted through his defeat; all the while acknowledging Nanashi's progress and stating he is proud of him. He laments in his belief that Gods, unlike humans, cannot change their fate and that they are destined to remain connected to humanity. He proclaims he is not truly dying, and disappears in the same light that gave birth to new Dagda who then lends Nanashi his power for the final fight.

During the fight with YHVH, the new Dagda expresses awe at humanity's power of understanding. He realizes the key to defeating their final enemy and encourages Nanashi and his friends to take advantage. Giving Nanashi his power, he teams up with him to "drag him from that throne." When YHVH curses the party for defeating him, the new Dagda just rebukes him; saying the enemy's views disgusted him before joining Nanashi's friends in encouraging him to end it.

In the end, the new Dagda expresses admiration to Nanashi for finding his own path. Dagda restores Nanashi's humanity, deeming his life his own once again. He thanks Nanashi for carving out a path for both Gods and humanity alike. While admitting he does not disagree with his original self's cynical and misanthropic view, he is alive and reborn in addition to achieving new understanding because of Nanashi and confesses he feels blessed to have met him; he is now willing to accept compromise or his mother's advice and now strives to work with his mother to form a new future for both fairykind and mankind.

If Nanashi accepts Dagda's deal to recreate the Universe with the egg, all of his human partners (save for Asahi, whose soul was still held captive by Krishna) will desert and turn against him, since they will not allow Dagda to ascend Nanashi into a god. Navarre and Nozomi will confront him first and be killed, with Danu killed alongside Nozomi as well. Hallelujah, Isabeau, Gaston and Toki will fight Nanashi and meet the same fate as Nozomi and Navarre afterwards.

If Nanashi has been in favor of his human friends but chose to side with Dagda, Navarre will remove all of his consumable items at the start of the battle.

After defeating Vishnu-Flynn, Nanashi will kill Krishna using Masakado's Blade, and Dagda will have Nanashi sit on the Cosmic Egg's throne. He will then offer Nanashi to sleep and wait for the final battle, where Stephen contacts him in a dream. When he woke up, Dagda will offer him to revive a captive soul from one of Nanashi's partners he freed from the Cosmic Egg as his only partner for the rest of the game. This partner can be Asahi or any of the other six that Nanashi killed before, and will become a mindless extension of him. He will proceed to revive Flynn as well, again as a mindless extension of Dagda and Nanashi.

At the end, Dagda succeeds in his plans, as Nanashi has slain YHVH at long last, albeit at the cost of the lives of his friends and many others. Regardless, he is capable of replacing YHVH, though he passes this ideal to Nanashi, who is human, thus he can always remember the consequences of being corrupted and becoming arrogant. He later disappears after the creation of the new world Nanashi establishes, becoming one with the universe and the Axiom just as he always wanted.

"A giant of a demon with a hardy appetite. Carries his own pot of rice into battle."
—Demonary, DemiKids

Known as Bounty in the game. He is obtained in Light Version by completing Wartak's 4th quiz.

Dagda is a dark element unit obtained through a twitter event leading up to the Shin Megami Tensei IV Final x Brave Frontier event. He was released to all players after surpassing the goal of 4000 tweets. 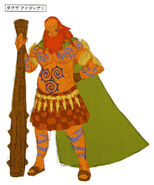 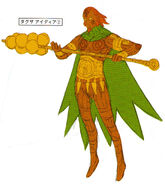 Dagda as he appears in Brave Frontier

Retrieved from "https://megamitensei.fandom.com/wiki/Dagda?oldid=392933"
Community content is available under CC-BY-SA unless otherwise noted.