Yukari Oribe
DB Kuroe is a character from Shin Megami Tensei IMAGINE, and one of the first NPCs the players meet.

DB Kuroe is the first Devil Buster the player meets in IMAGINE, and is tasked with training new recruits, as well as investigating the disturbances in Second Home.

Soon after reuniting with the player, they are confronted by a Taraka. She perishes at her hands while protecting the player. Her demon partner Cerberus, also wounded, joins up with the player after her death.

After a player has completed the main storyline in its entirety, they are tasked with investigating Second Home again as an Extra Dungeon instance. In the boss room, an undead Kuroe, still wishing to protect the area from invaders, will appear. In this state, she appears as a Fiend Race demon. With her true death, the lower levels of Second Home are opened for exploration.

Kuroe from a parallel world appears as one of the Setsu and Azura of that world's companions. She does not appear during the initial Basilica quest, but later when saving Azura and the player from Ose Hallel. Like them, she fights alongside the player as NPC support in the End of Days Ichigaya instance.

After completing a series of quests from her, players are able to fight her in a one-on-one match. For this fight, she uses shot skills and a powerful almighty rapid. As support demons, she brings along a Mot and a Chimera. Through her resistances and features, it becomes apparent she is using Cerberus through digitalize.

In the anniversary's true ending, obtainable after defeating all three parallel world characters and Satan, it is revealed that the branch point between worlds is where instead of sacrificing herself to save the player character, Kuroe hesitated, leaving them to die.

Before the game's server was shut down, a series of system messages were broadcast from the game's major characters which ended with Kuroe thanking the player. 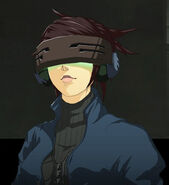 Kuroe in Act 0 of the game 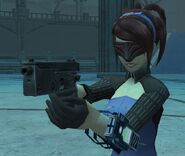 Kuroe from the parallel world