Cybele is a recurring demon in the series.

Cybele is the deity of Phrygia, a realm in ancient Anatolia, that represents the idea of a mother goddess, similar to Gaia of the Greeks. Cybele is also associated with various natural elements, including wildlife and vegetation. Wild cats in particular were often associated with her. It's possible she was derived from an earlier mostly Hittite goddess, Kubaba.

In Greece, Cybele was a protector of several city-states, one of which is Athens. Her most celebrated Greek rites and processions showed her as a foreign and exotic mystery-goddess. She arrives in a lion-drawn chariot to the accompaniment of wild music, wine and a disorderly, ecstatic following. She was unique among deities worshiped by the Greeks as she had a transgendered, or eunuch, priesthood. Many of her Greek cults included rites to a divine, castrated, Phrygian shepherd-consort known as Attis. She is associated with mountains, town and city walls, fertile nature and wild animals, namely lions.

In Rome she was known as Magna Mater, meaning Great Mother. They would reinvent her as a Trojan goddess, which made her a goddess ancestor of the Roman people by way of the Trojan prince Aeneas. With Rome's eventual dominance over the Mediterranean, a Roman version of Cybele's cult would spread throughout the entire empire.

Cybele appears in the Womb of Grief on floors that have previously been cleared as part of the EX Mission Wardens of Womb of Grief. She appears once the previous Warden, Volvo, has been defeated, and upon defeat is replaced with the next Warden, Anat.

Upon defeat, Cybele can be summoned through a Special fusion requiring Tlazolteotl, Xiuhtecuhtli and Anzu once the protagonist reaches level 76.

"Phrygian goddess of the earth. She had a cult following even in Rome.
A goddess of the mountains of Phrygia, she is often depicted on a throne with lions on each side or on a chariot pulled by lions and known as a mistress of animals. Cybele was incorporated into Greek mythology as well, but was often seen as Rhea, who was another earth goddess, and eventually assimilated with her."
—Devil Summoner: Soul Hackers 3DS compendium

"The embodiment of Mother Earth, as well as her protector, it is revered in the mountains of Turkey. Cybele commands wild beasts, using lions in particular. She was later celebrated in Roman culture as well."
—Gouma-Den devil chart

Cybele appears as a boss in Chapter Three in the Great Summoner's Hall if Raidou is Law-aligned. She inflicts fatal injuries on High Pixie during the fight against Nagi, which leads to her death after Raidou beats her. She picks a fight with Raidou since she wishes to fight a strong summoner and says weak summoners are better off dead. She calls for reinforcements, which are Lamias during the battle and uses Shock Wave frequently.

Cybele is the ultimate Persona of the Lovers Arcana. She can be obtained by maxing out the Yukari Takeba Social Link and then can be fusible upon reaching level 68 or higher.

Aside from returning as the ultimate Persona of the Lovers Arcana; Cybele can be fused with any Nihil weapon to obtain Sabazios a weapon in the form of gloves that inflicts ice damage and grants the user ice boost.

"Phyrgian Goddess of the earth. Attis was her son and consort, but she drove him mad, and he castrated himself. Her orgiastic cult spread to Greece."
—Persona Q: Shadow of the Labyrinth compendium

"The Phrygian mother goddess of the earth, she is often depicted with wild animals, and lions in particular. She had her priest, Attis, as a lover, but drove him insane when he was forced to marry another."
—Persona 5 background

Cybele is the ultimate Persona of the Priestess, unlocked for fusion after completing Makoto Niijima's Confidant. Itemizing Cybele creates Sabazios, one of the strongest melee weapons for Makoto which grants a large boost to critical rate. She is also the only natural source of the Drain Bless skill.

Cybele as she appears in Card Summoner

Cybele as she appears in Persona 5 Royal 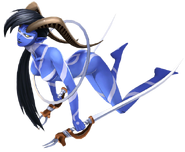 Cybele as she appears in Persona O.A.

Cybele as she appears in Persona O.A.