Culebre is a demon in the series.

Culebre, or Cuélebre, is a mythological giant winged serpent-dragon of the Asturian and Cantabrian regions of Spain, that lives in a cave, guards treasures and keeps xanas as prisoners. Although they are immortal, they grow old as the time goes by and their scales become thick and impenetrable, and flag wings grow in their bodies. They don't usually move, and when they do it, it is in order to eat cattle and people. One can kill the cuélebre giving him as meal a red-hot stone or a bread full of pins. Its spit it is said to turn into a magic stone which heals many diseases.

In Midsummer, which is a magical night in Asturian and Cantabrian folklore, it is possible for brave men to defeat the culebre, whose spells don't take effect that night, and marry the xana and get the treasure. However in Cantabrian areas it's said the night of Saint Bartholomew the creature increases his power and unleashes all his fury against people in revenge.

When the cuélebre grows older its scale become thicker and thicker, and he must flee Asturias and fly to the Mar Cuajada, a paradise located beyond the sea.

Culebre appears as a demon of the Snake order. In Revelations: Persona, he was renamed as Vixen; the Persona Tensen Nyannyan was also renamed with the same name, despite them being unrelated to each other.

"A majestic, emerald dragon with armor-like scales and a pair of massive wings."
—Demonary, DemiKids

Known as Hydron, he can perform the combo Hydro Blast with Wing Rox and Acid Rain with Poseidon.

"A winged dragon that stays at springs when it's young and moves to dwell in the sea when it matures.
A young Culebre lives in springs connected underground and won't attack unless approached. When it gets older and its scales harden, it guards treasure in caverns at the bottom of the sea. They suck the blood of humans and livestock. To avoid this, one should offer them bread of grains and corn."
—Devil Survivor 2 Compendium 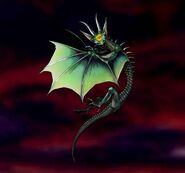 Culebre as it appears in Shin Megami Tensei: Devil Summoner

Culebre as it appears in Devil Survivor

Culebre as seen in Devil Survivor 2
Community content is available under CC-BY-SA unless otherwise noted.
Advertisement