The Crystal Skulls (水晶髑髏*)? are a plot device in Persona 2: Innocent Sin.

The five crystal skulls are used by the Masked Circle in order to drain Ideal Energy from those who possess dreams and utilize it to raise Xibalba so they can initiate their plan of bringing humanity to a utopian age. However, those who have their Ideal Energy drained turn into shadowmen, becoming invisible to normal people. Their existence is forgotten before they finally disappear. Joker has the Heaven Skull, King Leo has the Fire Skull, Queen Aquarius has the Wind Skull, Prince Taurus has the Earth Skull and Lady Scorpio has the Water Skull.

Only those who bear the constellation of the holy cross (people born under the constellations of Leo, Scorpio, Taurus and Aquarius) are able to fully control the skulls and consequently raise Xibalba, as explained by Lady Scorpio. The Last Battalion's Order of the Holy Lance is also qualified, as they represent all twelve signs of the zodiac. In Caracol, the Fuhrer steals the Heaven and Wind skulls while the remaining are given to the party's Shadow Selves.

Shadow Tatsuya watches over the Fire Skull at Leo Temple, Shadow Eikichi watches over the Water Skull at Scorpio Temple, Shadow Lisa watches over the Earth Skull at Taurus Temple and Longinus #5-7 watch over the Wind Skull at Aquarius Temple. The party is free to clear the four temples in any order they want to, however the interior structure of each temple changes depending on the order chosen and once the party enters a temple they are unable to enter the others and must clear that one first. This is because of the elemental affinities of each skull: once the party collects a skull, the balance is broken and one element will be strengthened (more complicated) and another one will be weakened (simpler). 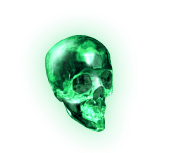