Crystal Skull is a plot device and demon in the Persona series.

The Crystal Skulls were once believed to be pre-Columbian Mesoamerican artifacts. When all 13 skulls are closely gathered it is said to reveal the mysteries of the universe. However, no Crystal Skulls have ever actually been excavated by archaeological digs in the Americas and the skulls first found in the 1800's were likely manufactured in Europe by imported Brazilian quartz. They were likely made simply to capitalize on the growing fascination in artifacts from the New World.

The five crystal skulls are used by the Masked Circle in order to drain Ideal Energy from those who possess dreams and utilize it to raise Xibalba so they can initiate their plan of bringing humanity to a utopian age. However, those who have their Ideal Energy drained turn into shadowmen, becoming invisible to normal people. Their existence is forgotten before they finally disappear. Joker has the Heaven Skull, King Leo has the Fire Skull, Queen Aquarius has the Wind Skull, Prince Taurus has the Earth Skull and Lady Scorpio has the Water Skull.

Only those who bear the constellation of the holy cross (people born under the constellations of Leo, Scorpio, Taurus and Aquarius) are able to fully control the skulls and consequently raise Xibalba, as explained by Lady Scorpio. The Last Battalion's Order of the Holy Lance is also qualified, as they represent all twelve signs of the zodiac. In Caracol, the Fuhrer steals the Heaven and Wind skulls while the remaining are given to the party's Shadow Selves.

Shadow Tatsuya watches over the Fire Skull at Leo Temple, Shadow Eikichi watches over the Water Skull at Scorpio Temple, Shadow Lisa watches over the Earth Skull at Taurus Temple and Longinus #5-7 watch over the Wind Skull at Aquarius Temple. The party is free to clear the four temples in any order they want to, however the interior structure of each temple changes depending on the order chosen and once the party enters a temple they are unable to enter the others and must clear that one first. This is because of the elemental affinities of each skull: once the party collects a skull, the balance is broken and one element will be strengthened (more complicated) and another one will be weakened (simpler).

"An ancient Out-Of-Place-Artifact found in Central and South America. It is said that if you collect 13 of them in one spot, the truth of the universe will be revealed."
—Persona 5 background

Crystal Skull is the eighth Persona of the Fool Arcana and can only be encountered in the Sheriruth area of Mementos in areas 7-9 and 11-13, after clearing Shido's Palace. The most effective way to capture this Shadow is by Downing it using the protagonist's Down Shot gained through the Tower Confidant. Barring that, Physical skills with a high critical rate (Lucky Punch/Miracle Punch) can be used.

Crystal Skull is the first Persona with access to the heavy elemental and force type multi-target skills, but as it is unable to be used in battle, these will need to be passed on to other Personas through fusion. When itemized through Electric Chair execution, Crystal Skull yields the Crystal Skull accessory, which increases all stats by 5 and grants the Evade Magic (high) effect.

"An ancient Out-Of-Place-Artifact found in Central and South America. It is said that if you collect 13 of them in one spot, the truth of the universe will be revealed."
—Persona 5 background 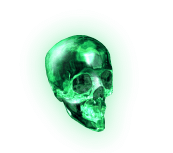 Crystal Skull's status page in Persona 5 Royal
Add a photo to this gallery
Retrieved from "https://megamitensei.fandom.com/wiki/Crystal_Skull?oldid=397670"
Community content is available under CC-BY-SA unless otherwise noted.