Cool is a character in the Devil Children series.

Cool is the default name of the Cerberus who is Setsuna Kai's demon partner. Setsuna summons Cool in order to defeat the Petit Frosts who kidnapped his brother. He is able to jump high ledges even while being ridden by Setsuna and move underground by digging holes. Cool originally lived in Sand Land with his younger brother Orthrus. One day he and his brother were having fun playing together but were both sealed after being tricked by Fenrir and his lackey Garm.

He is extremely loyal to Setsuna and proves that in Marble Land, where he takes a hit from Abaddon that was meant for Setsuna and is heavily injured by it, becoming unable to fight until consuming a special medicine received from Vibhishana. After winning the Tournament in Marble Land, Cool evolves into Death Cerberus. He evolves again into Hell Cerberus after defeating Nagahisa in Forest Land and then into King Cerberus after rescuing Lucifer in Central Land.

In the PlayStation version of Black Book, Cool is an opponent in the BattleNet X-class Cup. After being defeated, Cool tells Setsuna that he expected nothing less from his partner and rewards him with an Orthrus with higher stats than normal.

After beating the game Masaki Kuzuha can switch his partner Clay with Cool, who will start at level 1. Cool must be returned to Setsuna Kai in order to switch to another demon partner.

A Cerberus and the demon partner of Setsuna Kai, Cool appears in the first episode as the brainwashed minion of Lucifer. He randomly attacked homes of the Mokoi using his fire spells in the Expanse, which caused rocks to rain down on Earth. Setsuna frees him completely from Lucifer's control by kicking a rock at him. He hates being called a dog and initially didn't like being Setsuna Kai's partner, and the two butt heads often. 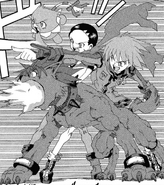 Cool as he appears in the Devil Children Manga

Cool in the Devil Children TCG
Add a photo to this gallery
Retrieved from "https://megamitensei.fandom.com/wiki/Cool?oldid=390581"
Community content is available under CC-BY-SA unless otherwise noted.