Start a Wiki
"You may call yourself a phantom thief, but you're still a minor. Someone had to support you. Furthermore, they did so knowing you were part of that group... ...Isn't the owner of that café an accomplice of yours!?"
—Sae Niijima interrogating the protagonist about Sojiro Sakura. 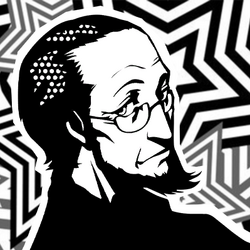 This article covers information about the Hierophant Confidant, Sojiro Sakura, including events and benefits featured in Persona 5 and Persona 5 Royal.

The protagonist can start Sojiro's Confidant as early as the evening of April 20th, after the protagonist learns of Kamoshida's suspension the day after clearing Kamoshida's Palace. Sojiro is always behind the counter at Café Leblanc, but can only be interacted with when the card is displayed above his head. Sojiro's Confidant Rank 1-4 can be progressed at any point in time. His Rank 5 and beyond cannot begin until after Futaba's Palace's deadline has passed.

Retrieved from "https://megamitensei.fandom.com/wiki/Confidant/Sojiro_Sakura?oldid=357910"
Community content is available under CC-BY-SA unless otherwise noted.