This article is missing Royal skills and dialogue. You can help the Megami Tensei Wiki by expanding it.

"...According to the reports, it seems that your skill at handling a gun is quite impressive. Either you taught yourself... or you had a capable coach by your side... Where did you learn how to handle a gun!?"
—Sae Niijima interrogating the protagonist about Shinya Oda. 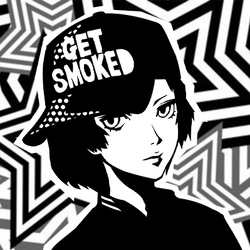 This article covers information about the Tower Confidant, Shinya Oda, events and benefits featured in Persona 5.

The protagonist can start the Confidant with Shinya Oda as part of the request "Winners Don't Use Cheats" obtained on September 4th. After learning the identity of the cheater from the patrons of the arcade on Central Street in Shibuya, the Phantom Thieves must face the cheater in Mementos. When it becomes apparent that the party won't be able to harm the Shadow of the cheater, they retreat to discuss strategy. After a conversation revealing that someone at another arcade would be able to beat the cheater, the protagonist can find Shinya Oda at the arcade in Akihabara. Shinya will agree to help the protagonist if he will introduce Shinya to the Phantom Thieves. Following this, the protagonist must talk to Futaba Sakura on the backstreets of Yongen-Jaya during the day to deliver a message to Shinya. The next interaction with Shinya will start the Confidant.

In addition to ranking up the Confidant, the protagonist will get a boost to his Kindness social stat through ranking up.

The protagonist must deal with Shinya's mother in Mementos to continue the Confidant. Shinya will text the protagonist during the evening and start the "A Mother's Aggression" request.

Retrieved from "https://megamitensei.fandom.com/wiki/Confidant/Shinya_Oda?oldid=366829"
Community content is available under CC-BY-SA unless otherwise noted.