Start a Wiki
"Acting as a Phantom Thief would've been more efficient alone. You could've gone about it that way... However, you did not. There are merits to having associates... That's what you decided. Am I wrong?"
—Sae Niijima interrogating the protagonist about Ryuji Sakamoto. 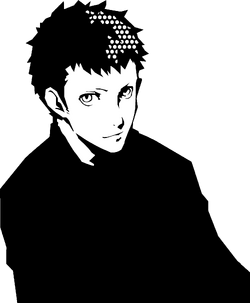 This article covers information about the Chariot Confidant, Ryuji Sakamoto, events and skills featured in Persona 5.

The protagonist automatically starts Ryuji's Confidant on April 12th, after exiting Kamoshida's Palace for the second time. He can be found during the day near the stairway by the protagonist's classroom on the second floor of Shujin Academy. During days off, Ryuji is hanging out in the arcade in the central street of Shibuya.

To initiate Ryuji's Rank 7 Confidant, the protagonist needs to wait until he texts him at night when he is ready to go out on a stakeout in Tsukishima at specific dates:

Retrieved from "https://megamitensei.fandom.com/wiki/Confidant/Ryuji_Sakamoto?oldid=346180"
Community content is available under CC-BY-SA unless otherwise noted.