< Confidant
View source
watch 04:03
Wiki Targeted (Games)
Do you like this video?
Play Sound
"I can't believe you evaded the police's network until today… The only logical explanation is that someone in the police has ties to the Phantom Thieves… Explain yourself!"
—Sae Niijima interrogating the protagonist about Goro Akechi. 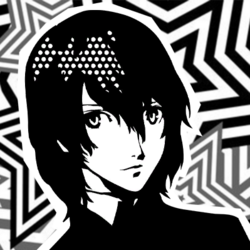 This article covers information about the Justice Confidant, Goro Akechi, including events and skills featured in Persona 5 and Persona 5 Royal.

The protagonist automatically starts Akechi's Confidant on June 10th, during a social studies trip to a TV station. In Persona 5, the Confidant is automatically ranked during certain story events. As such, he gains no points regardless of dialogue chosen.

In Persona 5 Royal, Akechi's Confidant is now manual. He can be found in Kichijoji outside the Darts and Billiards club Penguin Sniper at night, even on rainy days. Maxing out his Confidant will also make it possible to see the altered true ending cutscene.

Completing Akechi's Confidant enables the fusion of Metatron. Akechi does not have a farewell gift for the protagonist on 3/19.

To achieve Akechi's Ultimate Persona, several options must be chosen:

The subsequent True Ending on the 20th of March will also be altered as long as the protagonist maxed Akechi's Confidant, regardless if his third awakening occurred.

For the events that occur should the protagonist not fulfill Akechi's promise, see here.