This article is missing Confidant points without matching Personas. You can help the Megami Tensei Wiki by expanding it.

"We were impressed with the intel-gathering skills of the Phantom Thieves as well. We also know that this would've been impossible unless you had a skilled hacker... ...Who was doing this!?"
—Sae Niijima interrogating the protagonist about Futaba Sakura. 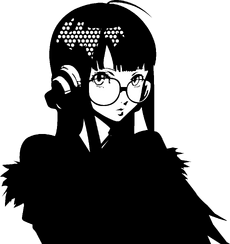 This article covers information about the Hermit Confidant, Futaba Sakura, events and skills featured in Persona 5.

The protagonist automatically starts Futaba's Confidant on August 31st. She can be found during the day outside of Cafe Leblanc.

Retrieved from "https://megamitensei.fandom.com/wiki/Confidant/Futaba_Sakura?oldid=346181"
Community content is available under CC-BY-SA unless otherwise noted.