Ryan Bartley
Coach Hiraguchi is a character from Persona 5 Royal. She appears in Sumire Yoshizawa's Confidant hangouts. She is the coach of the Yoshizawa sisters.

Hiraguchi is a lean woman with black, short hair and a very strict expression. When in a gym, she wears a neon blue tank top and a pair of black stretchy jeans. Her winter outfit consists of a deep blue leather jacket with a cotton dress inside and a pair of deep blue slacks.

Hiraguchi is a strict but talented coach for the Yoshizawa twins, sporting a spartan and effective, but not draconian training regimen. According to Sumire, when she didn't know even the basics of gymnastics when she was a child, Hiraguchi would buy ice cream for the twins for exceptional performances, encouraging her to practice better. She's also quite intelligent and perceptive, as she knows that the fake Kasumi is Sumire Yoshizawa not by personality, but by the way she does gymnastics, as her skills are never on par with the real Kasumi.

Hiraguchi is the Yoshizawa twin's personal instructor. When the twins were children, Hiraguchi would buy them ice cream for good performances, which motivated Sumire to practice better. Both of them receive the same training regimen, and she was such an effective coach that both twins become highly skilled. However, Kasumi takes her training quite effortlessly, while Sumire would take a greater deal to achieve good performances, and even then she wasn't as skilled as Kasumi.

During the time where Sumire was being manipulated into thinking that she was Kasumi, Hiraguchi told her to stop training because she believed that Sumire wasn't acting on her own self and was merely impersonating Kasumi as she clearly cannot replicate Kasumi's bold performances. She believes that this was choreographer's block, and the coach continues to give her training as usual, although she still treats her as if she were Sumire.

During Sumire's Rank 7 event, the protagonist meets her for the first time in the gym, where Sumire thanks her for teaching her even during the painful moment where she was "impersonating" Kasumi. When Sumire performs several punching moves, she would comment that she still wasn't on par with Kasumi's, despite a few men near her noticed that she isn't that far from Kasumi. While upset at first, Hiraguchi then tells her that Kasumi never looked down or acted in a condescending fashion for her, and took her as a worthy rival on equal terms, which shocked Sumire and made her more determined to act as her self instead of trying to mimic her sister. Hiraguchi then pulls the protagonist to do training, and even then the protagonist finds her rather tough.

During Sumire's Rank 10 event, Hiraguchi tells Sumire to perform once in front of her and the protagonist, in which she sees that Sumire had clearly grown away from being a shadow of Kasumi. As she tells Sumire about the rugged road to internationals, Sumire tells her that she will take it instead of she will try to take it, something that she didn't say before. When Sumire told Hiraguchi that a person gave her the motivation, the coach still believes that she's on Kasumi's shadow until the protagonist admits that it is his doing. The coach congratulates the protagonist for his understanding of people and leaves, looking forward to her next lesson.

When Takuto Maruki's dream world collapses, Sumire can be seen requesting a temporary break to her so she can look for evidence for the protagonist's innocence and make him leave juvenile hall. Her coach rejects the request and tells her that she will assist her in finding information that can prove it as she continues training, and the protagonist would want that. 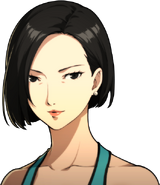 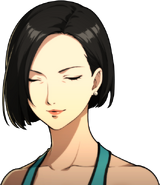 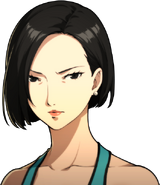 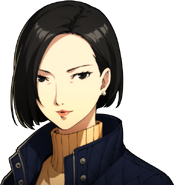 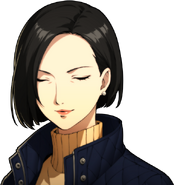