Keith Silverstein
"I am Chronos… I was born from man, and accompany man on his journey… You wander an ephemeral dream… Your transience affords uncompromising power… What is your life…? What is your death…?"
—Clockwork God during the final battle, Persona Q

The Clockwork God is the main antagonist of Persona Q: Shadow of the Labyrinth.

He is an embodiment of death and one half of the deity Chronos alongside Zen. Zen had locked him away within the bell tower of the alternate Yasogami High, as he chose to ignore his duty for the time being in order to find an answer to Rei's reason for living. However, he would eventually awaken, starting the events that lead both teams of Persona users to this world.

He does not directly appear for most of the game, but his strongest minion, a Shadow known as the Captor Spider has appeared multiple times throughout in the game. At its beginning, Yosuke Hanamura (P4 Route in Yasogami High School) and Fuuka Yamagishi (P3 Route in Tartarus) briefly notices the spider. Then it appeared in You in Wonderland and notes that time has begun to move, The spider appears briefly before the group again at the beginning of Evil Spirit Club, scaring some of them and leading to a stroll event where they realize something is odd about the spider that could appear in the Dark Hour. His goal is to have Zen uncover his and Rei's memories so Zen can move on, reunite with him as Chronos, then actually depart Rei into the Sea of Souls instead of spending his time in the false Yasogami. The Clockwork God's goal of departing Rei is identical with those of Zen for they are one and the same, although Zen did not want to see Rei dispersed in a painful way and the Persona users are not willing to see such a thing happen, forcing them to go after him.

In order for him to do so, he made the Persona users, Rei and Zen remove the guardians deployed in the attractions in order to make them retrieve the items that awaken their memories. Once this is done, the Clockwork God then manifests himself fully in the Clock Tower of the false Yasogami High School upon completing Inaba Pride Exhibit. A pile of Shadows appeared in front of Rei and forms into the Captor Spider, which captures her inside it and escapes to the top of the Clock Tower, awaiting the party and Zen's arrival. Once the Captor Spider is defeated, the Clockwork God himself emerges from the gears of the clock tower and attacks the party.

Beneath the iron mask is a face identical to Zen's, which covers up his face during the battle. Seeing that his other half has decided to live as a mortal, Clockwork God has decided to erase him for turning his back on his divine purpose and also threatens the Persona users with erasure for choosing to oppose him rather than to return home. After losing the battle Zen shatters him, showing gratitude that his own end has come as his body falls apart and vanishes. Zen then departs Rei into the Sea of Souls personally and granted her a peaceful eternal rest as both disperse into it.

Bring plenty of revival items to the fight, and/or several party members with (Sama)Recarm and several SP-restoring items, as he can put the party on a relatively unrealistic timer using Gears of Time. It can act twice per turn, and has a normal attack that hits the entire party.

The main obstacle in this battle is the skill Gears of Time, as it is an unstoppable countdown that will kill the affected party member. Naturally, on Risky this means the battle must be ended quickly before Gears of Time claims the protagonist. Clockwork God will not cast Gears of Time unless all party members are currently not affected by it, so keeping a single affected party member alive is more efficient than juggling everyone's counts at once. Using revival spells or items can increase the countdown to delay their inevitable death, but each action spent reviving is an action not spent attacking Clockwork God. On Risky, it is best to leave the protagonist with the countdown while everyone else has already died once to be revived later, while keeping his countdown from dropping to 0 and heavily minimizing the use of revival items.

Fight conservatively, as once Clockwork God reaches 50% HP it will use Time Reversal to restore all its health, however it only does this once per battle. This can be skipped if one does enough damage to put it to 25% HP or lower after that monologue, a goal well within the player's reach should he or she successfully panic the boss, but difficult otherwise. Past this threshold, Clockwork God will occasionally spend its entire turn to "concentrate" - this signifies that the party should spend the next turn Defending since it will use Time Stop next turn, allowing it to perform 5 attacks in a row. 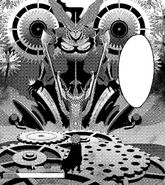 Clockwork God as he appear in Side: P4