Cleopatra is a demon in the series.

Cleopatra VII Philopator was the last active ruler of Ptolemaic Egypt. As a member of the Ptolemaic dynasty, she was a descendant of its founder Ptolemy I Soter, a Macedonian Greek general and companion of Alexander the Great.

While still young, Cleopatra's two elder sisters, Cleopatra VI Tryphaena and Berenice IV, attempted to seize the throne from their father when he fled to Rome for support against his enemies. Both women were brutally killed for their efforts, leaving Cleopatra as the eldest of her father's remaining offspring.

Cleopatra heard of the arrival of the greatest hero of her time: Julius Caesar. Caesar came to Egypt in pursuit of his old rival and former son-in-law Pompey Magnus. She forged an alliance with Caesar to secure power and, following his death, joined the general Mark Antony in opposing Caesar's grandnephew and heir Octavian. After defeating Antony and Cleopatra's naval fleet, Octavian's forces invaded Egypt and defeated Antony.

In the confusion following the battle, the lovers were separated. Antony, fearing that Cleopatra was dead due to a false report, committed suicide, learning too late that his lover had survived. Not wanting to be captured by the Romans, Cleopatra then killed herself, presumably by letting an asp (a poisonous Egyptian snake) bite her.

After the death of Cleopatra, Egypt became a province of the Roman Empire, marking the end of the second to last Hellenistic state and the age that had lasted since the reign of Alexander.

"More specifically, "Cleopatra VII." Her name means "glory of the father" in Greek. She is known as one of the greatest beauties ever to live, having charmed many with her musical voice and conversation skills. It is said that all of history would have unfolded differently had she even just her nose been longer or shorter."
—Shin Megami Tensei IV Apocalypse compendium

Cleopatra only appears and is fought during the DLC quest "Coastal Inverted Pyramid." It is conducted without the assistance of any allies.

Nanashi receives a quest to investigate the sudden disappearance of several women. He has also noted the disappearance of Asahi. Upon arrival at a structure with a peculiar resemblance to an inverted pyramid, he notices that the area is almost completely covered in roses. Further investigation reveals that there are mummified bodies beneath them. He journeys deeper into the structure to find and release Asahi, only to get attacked by an army of Egyptian demons.

After their defeat, they lament the failure to fully revive Cleopatra, since Asahi was the last of the 1465 women they had abducted to complete the ritual. Nevertheless, Cleopatra revives in her slightly imperfect form, attacking Nanashi for his interference.

Defeating Cleopatra unlocks her for fusion. She is fused through a special fusion of Sphinx, Phoenix and Sarasvati. She can teach Nanashi the Deadly Wind, Ice Age and Mediarahan skills through her Demon Whisper. Cleopatra benefits from learning Light, Ice, Force, ailment and healing skills.

"More specifically, Cleopatra VII. Her name means "glory of the father" in Greek.
She is known as one of the greatest beauties ever to live, having charmed many with her musical voice and conversation skills. It is said that all of history would have unfolded differently had even her nose been longer or shorter."
—Shin Megami Tensei V lore

Cleopatra is the central figure of the DLC quest, "The Rage of a Queen". Originally the representative of Bethel's Egyptian Branch, she was unable to maintain control of her group and was eventually overthrown. She cursed all the demons of Bethel and the organization was authorized to kill her if she posed a threat to them. A researcher later asks the protagonist to deal with her before she could cause any problems, having been reported to sulking around a bus in Mita. When he approaches her, she attacks them out of the mistaken belief that he was sent to kill her. After defeating her, she attempts to commit suicide; should the protagonist intervene, she will realize his intentions and gladly join their party. If they do not, she kills herself and leaves behind some Magnetite Powder, which the protagonist can bring back to the Bethel researchers to summon her via Demon Summoning Program for recruitment. Nonetheless, both options lead to her being unlockable for fusion.

She is fused through a special fusion of Titania, Isis, Lamia, and Narcissus.

Cleopatra has her signature skill Frolic, which inflicts all enemies with the Charm ailment and greatly reduces their attack and defense for 3 turns. She benefits from learning Ice, Force, Light, Healing and Support skills.

Cleopatra as she appears in Shin Megami Tensei V 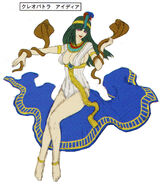 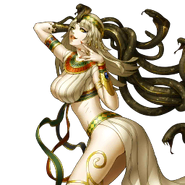 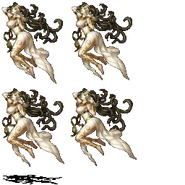