El
Ciel is the default name for the protagonist of Last Bible III.

Ciel is the son of Glen, a peaceful man who fought in the Polisian War. Rudy is his little brother, who gets scolded often by his mom Ilia.

It's later revealed by Lucifer that he is the reincarnation of El.

Through the tradition of the Last Bible series, Ciel is a silent protagonist, where his personality is based upon players' actions and decisions. 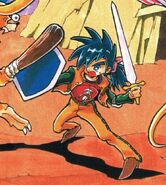