Chrom is a character from Tokyo Mirage Sessions ♯FE.

Chrom is the main character of Fire Emblem Awakening. He is the prince, and later Exalt, of the Halidom of Ylisse and a descendant of the Hero-King, Marth. He is also the captain of Ylisse's defense force, the Shepherds, and wields the legendary sword Falchion. He leads his Shepherds force to protect the peace when the neighboring nation of Plegia begins acting suspiciously, and later repels an invasion of the foreign Valm Empire. With forces of Valm defeated, Chrom and his allies gather the gems of the Fire Emblem in order to thwart the schemes of the Grimleal and their god, the Fell Dragon Grima.

A prince from another dimension, Chrom is a "Lord" Mirage who has lost his memories. He is courageous and has a strong sense of justice. In combat, he transforms into a sword for his Mirage Master Itsuki. Chrom was one of the corrupted Mirages until Itsuki freed him and made a pact with him. He regains his memories when Medeus is defeated, and returns to his own world eventually. 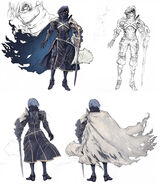 Concept artwork of Chrom as a Great Lord

Concept artwork of Chrom as a Conquer

Chrom and Itsuki Illustration by to18

Chrom in an anime cutscene

Artwork of Chrom and Itsuki in Fire Emblem 0 (Cipher).

Artwork of Chrom and Itsuki in Fire Emblem 0 (Cipher). 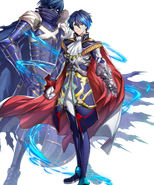 Artwork of Chrom and Itsuki from Fire Emblem Heroes by Mikuro. 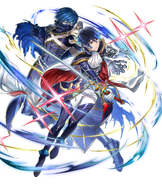 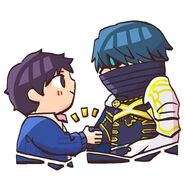